The State Emergency Operation Centre said, death toll across the state due to rains, floods in current season stood at 94 till Wednesday. 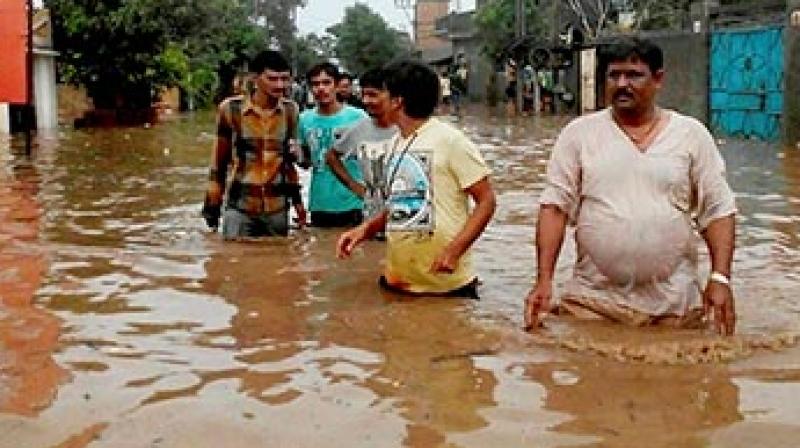 Kharia and Sihori, situated along the banks of the Banas, were among the worst-hit villages in the district after water was released from the Dantiwada dam two days back. (Photo: PTI/Representational)

Gujarat: At least 25 people, including 14 of a family, were found dead in two villages of Banaskantha district due to floods following torrential rains in Gujarat, the police said.

According to the State Emergency Operation Centre, the death toll due to heavy rains and floods across the state in the current monsoon season stood at 94 till Wednesday.

Of the 25 found dead in Banaskantha, 17 persons, including 14 of a family, drowned in the flood waters in Kharia village under the Kankrej taluka, said an official.

Twenty five bodies were fished out by the police and locals after the flood water receded in the district.

"Seventeen bodies were recovered from Kharia village of Banaskantha and seven more were fished out at the neighbouring Sihori village. Another body was found in the interiors, taking the total number of bodies recovered from the district to 25," said Assistant Superintendent of Police Akshayrajsinh Makwana.

A D Parmar, Inspector, Thara Police Station, under which the Kharia village falls, said they feared that more bodies might be found after the water receded at over a dozen villages located along the banks of the Banas river.

Kharia and Sihori, situated along the banks of the Banas, were among the worst-hit villages in the district after water was released from the Dantiwada dam two days back.

Around 1.5 lakh cusecs of water was released from the dam following heavy rains in neighbouring Rajasthan, which resulted in inundation of several villages along the banks of the river in Banaskantha.

"Kharia is one of around 14 villages in the taluka which are badly affected due to the flood. As the water level of the Banas river rose suddenly, those living in these villages did not get a chance to relocate to a safe place in time," said Parmar.

State Emergency Operation Centre officials said as per the latest figures available with them- excluding the 25 deaths reported on Thursday- eight people had died in Banaskantha and Patan districts in the last two days due to the floods.

The toll due to heavy rains and floods across the state in the current monsoon season stood at 94 (barring the 25 deaths reported from Banaskantha on Thursday), they added.

Banaskantha and Patan are among the worst-hit districts due to heavy rains and flooding of the Banas and Sipu rivers.

The huge quantum of water released from the Dantiwada and Sipu dams due to heavy rains in Rajasthan compounded the situation, said officials.