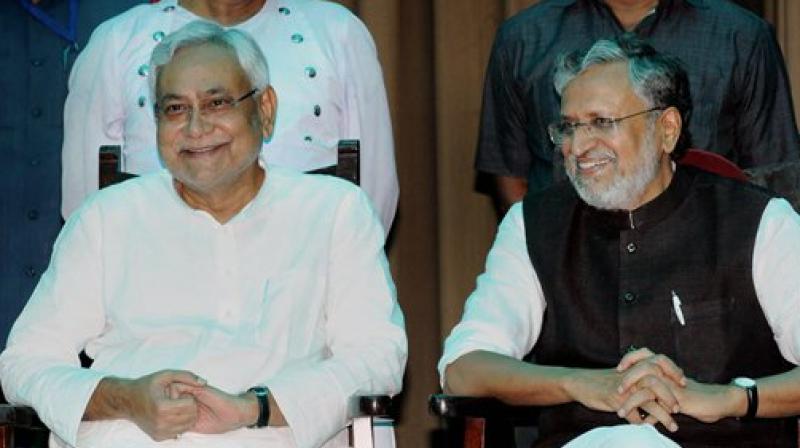 Nitish Kumar with senior BJP leader Sushil Kumar Modi at an oath ceremony function, at Raj Bhawan in Patna. Kumar was sworn-in as the Chief Minister of Bihar while Modi as the Deputy Chief Minister. (Photo: PTI)

Patna: The decision to part ways with the Rashtriya Janata Dal (RJD) and joining hands with the BJP was taken in the interest of Bihar and will ensure development and justice for the state, Nitish Kumar said on Thursday after being sworn in as the chief minister.

Kumar resigned the post on Wednesday evening after a fall out with the alliance partner RJD over corruption charges against Lalu Yadav and some of his family members, including son Tejaswi, who was the then deputy CM.

"Whatever decision we have taken will be in the interest of Bihar and of its people. It will ensure development and justice. It will also ensure progress. This is a collective decision. I ensure that our commitment is towards the people of Bihar," Nitish Kumar told reporters.

Kumar was sworn in as the chief minister of the state along side senior BJP leader Sushil Kumar Modi, who will be his deputy in the new government, at the Raj Bhawan in Patna.

Nitish Kumar will prove majority in the Bihar Assembly on Friday. It will be a special session where the new Janata Dal (United) and Bharatiya Janata Party (BJP) alliance will prove their political mettle.