The locusts keep flying during day time and settle down only after dark in the evening. 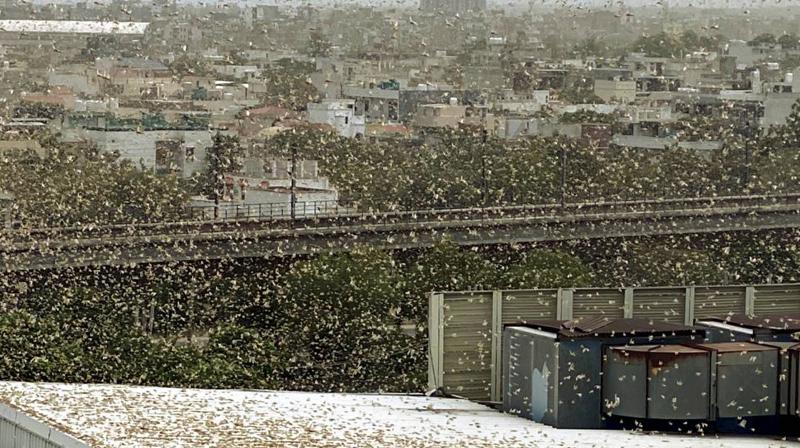 As crop-threatening locust swarm enters the outskirts of Delhi, the Union Agriculture Ministry on Saturday said more teams from Rajasthan have been deputed to help in the control operations being undertaken in Haryana and Uttar Pradesh.

The locusts keep flying during day time and settle down only after dark in the evening. Ground control teams are constantly tracking them and will undertake major control operations once they settle down, it said, adding the control teams in Uttar Pradesh have been alerted in this regard.

The control operations are underway in Rajasthan, Haryana and Uttar Pradesh, it added.

"More control teams from Rajasthan have been moved to Haryana and UP to help in the locust control operations being carried out in these two states," the ministry said in a statement.

Locust swarms were noticed in Jhunjhunu (Rajasthan) in the morning of June 26, and control teams were deployed to eliminate the locusts. The leftover locusts regrouped and reached Rewari in Haryana on June 26 evening, where control operations were undertaken till Saturday early morning, it said.

The leftover locusts again regrouped and the swarm divided into three groups, one of which moved towards Gurugram, and from there to Faridabad and onwards to Uttar Pradesh, it added.

All the groups of locust swarms are being tracked by teams of the State Agriculture Departments of Rajasthan, Haryana and Uttar Pradesh, local administrations and officials of the Central Locust Warning Organisation, and control operations are underway, the ministry added.

Delhi Environment Minister Gopal Rai asked the national capital's south and west districts' administrations to remain on high alert, said officials.According to an official who attended the meeting, the minister was informed that a small swarm of locusts has also reached the Asola Bhatti area in South Delhi.

The agriculture department asked to issue a detailed advisory to all district magistrates and sub-divisional magistrates to deal with a possible locust attack in Delhi.

The minister also asked the forest department to play DJs, beat drums and dhols to repel the swarms of locusts, the official said. Rai also asked officials of the Agriculture Department to make field visits to areas close to Gurgaon.