Breaking his silence on the encephalitis deaths, PM on Wednesday termed AES deaths as ‘unfortunate and a matter of shame for the nation’. 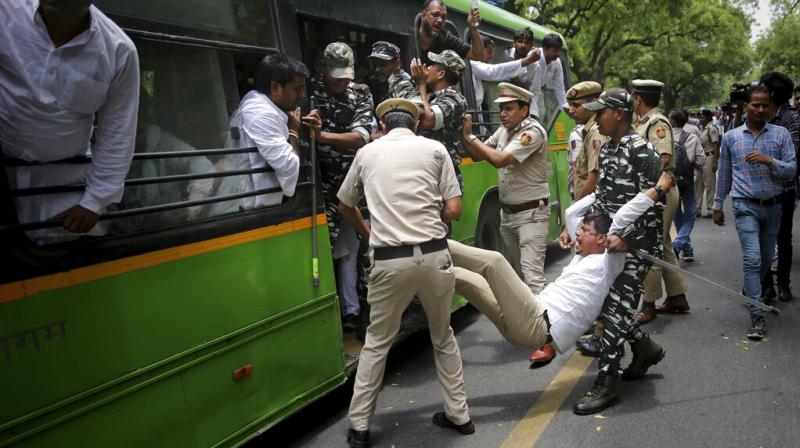 The Bihar government has announced a compensation of Rs 4 lakh each to the families of the children who died due to AES. (Photo: AP)

Vaishali: Residents of Harivanshpur village in the district have threatened to file a case against the state government and the local administration if the first information report (FIR) filed against 39 people is not withdrawn.

Suresh, a resident of the village, told ANI: "We will file a case against the Chief Minister, District Magistrate, BDO and other officials. We went to ask for help from the Chief Minister and they filed a case against us. This means they do not give the right to poor to speak. We will go wherever we get justice. We demand the case should be withdrawn."

An FIR was lodged against 39 people of Harivanshpur on Tuesday after they protested the lack of water supply and death of several children due to the acute encephalitis syndrome (AES) in the area.

Another resident Shiv Sahni said: "We will also file a case against the government. We jammed the road because of children (who died due to encephalitis) and the shortage of water."

"We were going to Muzaffarpur. We did not know that even after we cleared the road a case was registered against us," said Rajesh Sahni, another villager.

The death toll due to AES mounted to 132 in Muzaffarpur district, officials said on Wednesday.

Sri Krishna Medical College and Hospital (SKMCH), which is handling the largest number of patients in the district, reported 111 deaths while there were 21 deaths at Kejriwal Hospital.

The Bihar government has announced a compensation of Rs 4 lakh each to the families of the children who died due to AES. It has also directed the Health Department, District Administration, and the doctors to take necessary measures for the containment of the disease.

Breaking his silence on the encephalitis deaths, Prime Minister Narendra Modi on Wednesday termed the AES deaths as "unfortunate and a matter of shame for the nation."

Replying to the debate on the Motion of Thanks to President Ram Nath Kovind's address in the Rajya Sabha, Prime Minister Modi said that he was in constant touch with the Bihar government. "A collective solution would be found soon to end the crisis," he added.