Meira Kumar will file her nominations in the presence of Congress president Sonia Gandhi and a number of opposition leaders. 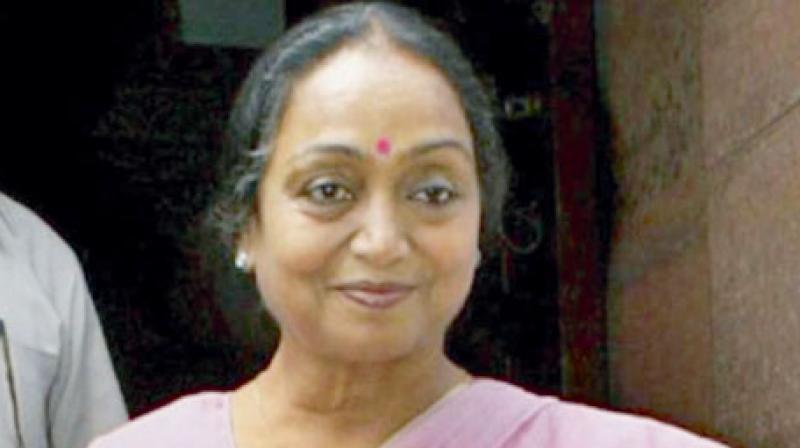 New Delhi: Opposition presidential candidate Meira Kumar will file her nominations on Wednesday, the last date for filing of nominations, in the presence of Congress president Sonia Gandhi and a number of opposition leaders.

According to sources, Kumar will file a set of four nomination papers which will be proposed and seconded by leaders of a number of opposition parties.

She will file her papers at 11.30 am in Parliament before the Lok Sabha Secretary General, the returning officer for the July 17 presidential election.

"Leaders of every opposition party will get an opportunity to propose or second the nomination of Meira Kumar, their joint candidate," said a senior Congress leader.

Leaders of a number of opposition parties including CPI-M's Sitaram Yechury and TMC's Derek O'Brien and other leaders representing opposition parties like the DMK, SP, BSP, RJS and JMM, will also accompany her during her nomination filing.

The 75-year-old Kumar is the joint opposition candidate of 17 non-NDA parties against the ruling NDA's nominee Ram Nath Kovind.

Kumar, a former Lok Sabha speaker, will launch her campaign from June 30 from Sabarmati Ashram in Gujarat, soon after the scrutiny of nominations on June 29.

She said that for her it is a battle of ideologies and not a 'Dalit versus Dalit' fight.

Kumar had earlier made an emotional appeal to the electorate comprising MPs and MLAs to cast their vote with their "inner conscience".

She also said the president's post cannot be used for narrow political interests.

Taking a leaf from former prime minister Indira Gandhi's appeal made during the 1974 presidential poll in favour of V V Giri, Kumar said, "This is that moment when one should heed to the inner voice of conscience and set the course of the nation."