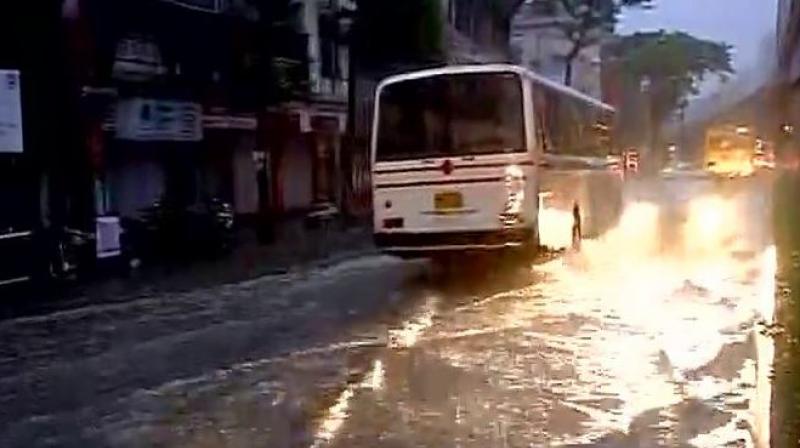 Many spots across the metropolis including Hindmata area in suburban Dadar, Sion, Matunga, and some parts in Andheri were waterlogged due to the incessant showers leading to traffic snarls and chaos on the roads.

Suburban railway services were also delayed on Tuesday morning and trains were running up to 20 minutes behind schedule, stranding daily office commuters especially on the Harbour and Central line.

According to civic officials, continuous rain spells uprooted trees at 22 places across the city but no human casualty was reported.

Officials however warned of a 4.81 metre high tide Tuesday afternoon (at 2.39 pm) coupled with heavy showers, which may cause flash floods in low-lying areas in the city.

According to BMC Deputy Municipal Commissioner (General Administration) Sudhir Naik, the disaster management team is keeping a tab on the situation.

"Civic body's preparatory forces are in place to tackle any eventualities. There has been no significant water-logging and our machinery is keeping a close eye on the developments," he said.

According to IMD, Mumbai and Konkan regions of Maharashtra experienced heavy showers in the past 24 hours as South West monsoon intensified in the state.

The weather department has forecast heavy rains over the next 24 hours in Konkan and Mumbai regions.

The Colaba observatory on Tuesday recorded 66.8 mm rainfall while the one at Santacruz recorded 39 mm rains ( till 8.30 am), a IMD official said.