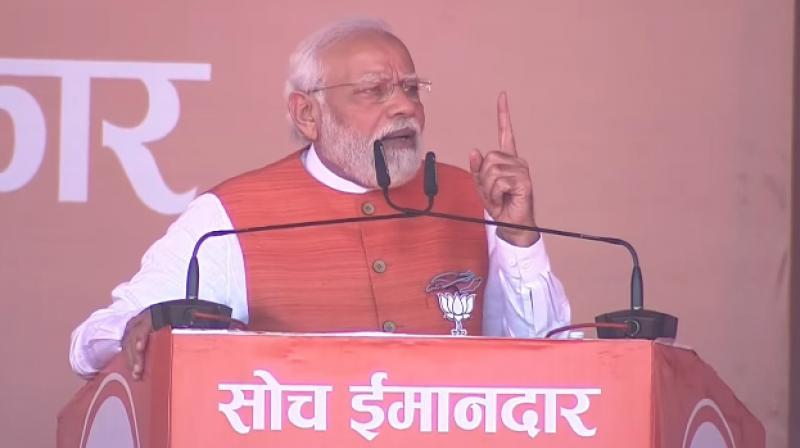 New Delhi: Taking forward the motto of “Sabka Saath, Sabka Vikas”, the Narendra Modi-led NDA government has completed eight years in office since the BJP came to power in 2014 under Mr Modi’s leadership, bagging 282 Lok Sabha seats, and then crossing the 300-seat mark in 2019. While Prime Minister Narendra Modi’s popularity and support base keeps growing, the BJP’s recent electoral wins, including in states like Uttar Pradesh, has already solidified the ruling party’s position ahead of the 2024 Lok Sabha polls. Since being elected to power in 2014, the Narendra Modi government has implemented many pro-people steps and taken many key decisions, including historic ones like nullification of the contentious Article 370 of the Constitution. The resolution of the age-old Ram Mandir-Babri Masjid dispute by the Supreme Court is also seen as among the Modi government’s achievements.

However, the launch of the largest vaccination drive in the world against the global Covid-19 pandemic, with over 192 crore doses administered so far, is perhaps the biggest achievement of the Modi government’s second term. While the world was battling the pandemic, India’s early Covid management and its vaccine diplomacy got praise from the entire world.

As the world was battling against Covid-19 and the country was under a full lockdown, the Modi government provided free rations under the “PM-Garib Kalyan Anna Yojana” to over 80 crore underprivileged people across the country.

The Modi government’s stress on “Atma Nirbharta” (self-reliance) gave a boost to many start-ups, generating jobs and adding to the country’s economy. While the Modi government prioritised the last-mile delivery of some key schemes, including Ayushman Bharat, Ujjwala, Swachch Bharat, PM Awaas, Jan Dhan, among others, the BJP added their beneficiaries to its vote bank, and they have been supporting the party since 2014.

As a result of the Modi government’s policy of “zero tolerance” against terrorism and its crackdown on terror and terror financing, India has not seen any major terror attack since 2014. India’s airstrikes on terror units across the border also sent out a clear message to terrorist outfits and their handlers that the country had changed its tactics when it comes to fighting terror and terrorists.

The Modi government has also focused on an infrastructure push in the Northeast and has taken several steps to ensure peace in the region, that otherwise used to be in the news for insurgency and the lack of basic infrastructure.

India’s stand on the ongoing Ukraine-Russia war also reflects the subtle change in its foreign policy. Despite pressure from the West, India kept a balanced approach towards both the warring countries and refused to give in to any kind of outside pressure.