India   All India  27 May 2021  COVID cases, positivity rate take a dip in Delhi, but black fungus a big worry
India, All India 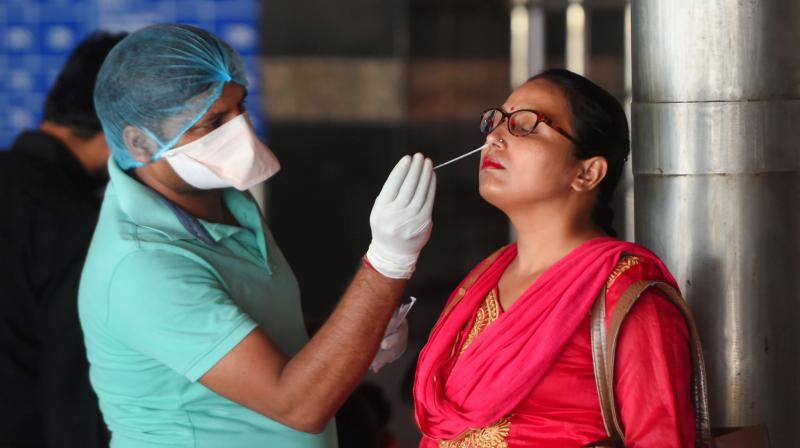 A health worker collects swab sample of a passenger at a COVID-19 testing counter at New Delhi railway station, on May 25, 2021.

New Delhi: Delhi, the nation’s capital, on Wednesday recorded a positivity rate lower than two per cent as fresh Covid-19 cases dipped to 1,491. This is the first time in nine weeks that the cases were so low as fatalities due to Covid-related complications remain high, at 130 on a single day. Wednesday’s fatality figures are, however, the lowest since April 15.

Another megacity, Mumbai, the nation’s financial capital, also saw a significant drop in its daily count -- with 1,362 new positive cases and 34 deaths, as 1,021 were discharged from medical supervision in 24 hours.

Across India, the daily cases showed a rise in the last 24 hours after a brief dip on Tuesday. In the last 24 hours, about 2.09 lakh fresh cases were detected while the deaths crossed 4,000. Union health ministry officials said Covid-19 cases are on a declining trajectory for the last 10 days and the country’s active caseload had come down to 24.95 lakhs -- a fall of 91,191 in active cases in the last 24 hours, with nearly three lakh recoveries. India’s recovery rate is now 89.66 per cent, while the weekly positivity rate is 11.45 per cent. Officials said the daily positivity rate was 9.42 per cent and was less than 10 per cent for two consecutive days.

Several cities have started easing restrictions. In Punjab’s Ludhiana, shops can now remain open till 3 pm and home delivery by restaurants is allowed till 9 pm, while night curfew timings have been changed in 36 Gujarat cities from 9 pm to 6 am instead of 8 pm to 6 am.

However, the bigger challenge for the government is to tackle the rising cases of black fungus. The Centre’s records show 11,717 patients under treatment for black fungus, or mucomycosis. The highest number of such patients are in Gujarat (2,859), Maharashtra (2,770), Madhya Pradesh (752) and Telangana (744). In Delhi, though the Centre’s list shows 119 patients are under treatment for black fungus, Delhi CM Arvind Kejriwal said the number was actually 620. He said that a shortage of medicines was hampering its treatment.

The Centre has, meanwhile, said that India was the second country after the United States to cross 20 crore cumulative Covid-19 vaccination coverage, adding that 42 per cent of the population above 60 had got the first dose of the vaccine. However, a bizarre incident was reported from Siddhartha Nagar on the Uttar Pradesh-Nepal border, where about 20 villagers were given a cocktail of vaccines -- Covaxin after Covishield. The villagers were injected with Covishield in the first week of April and then given Covaxin as their second dose on May 14.

NDTV reported that health department officials said there was no order from any authority to mix vaccines and an inquiry has been ordered into the incident. Officials claimed no one has reported adverse health effects from this mixup of vaccines so far.

“This is definitely an oversight. There are no instructions from the government to administer a cocktail of vaccines. So, it is an oversight. We have ordered an inquiry and have got the report. I have asked for an explanation from those who are guilty. We will take whatever action is possible,” Siddhartha Nagar’s chief medical officer Sandeep Chaudhary had told NDTV.