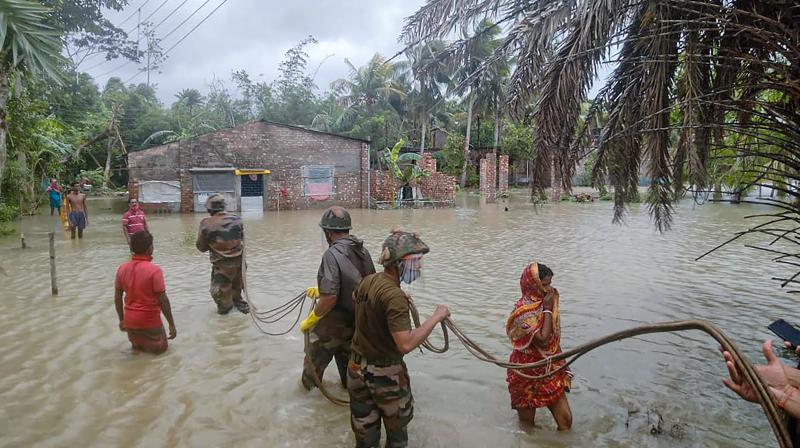 Thick sheets of rain blurred India's vast coastline in the East as the cyclone made landfall around 9 am near Dhamra port in Odisha, with surging waters swamping mud-and-thatch houses in the low-lying areas of various districts, where a massive evacuation drive has been undertaken to move more than 20 lakh people to safety.

Massive tides ranging from two to four metres high gushed into seaside villages resulting in marooning of innumerable households. Several rivers were also in spate owing to the phenomenal rise in water level -- caused by the dual effect of storm surge and the astronomical tide due to the full moon.

West Bengal chief minister Mamata Banerjee, who has stationed herself at the state secretariat Nabanna since Tuesday to monitor rescue and relief operations, claimed that her state is the "worst-affected" and said that three lakh houses and 134 embankments have been damaged due to the cyclone.

“At least one crore people were affected and three lakh houses have been damaged in West Bengal due to the rough weather conditions arising out of cyclone Yaas,” Ms Banerjee said.

"We could evacuate 15,04,506 people so far to our relief centres. But around one crore people were affected by the disaster which damaged nearly three lakh houses and destroyed at least 134 dams the number of which may go up. A field survey will be done later. Around 14,000 relief camps are running now," she said.

In certain areas, waves as high as the coconut trees that line the popular beaches, were seen surging.

The scenic West Bengal town of Digha, which shares the border with Odisha's Balasore district, lay swamped, with the Army being called in for rescue operations, a defence official said.

Parts of the nearby tourist towns of Mandarmani, Tajpur and Shankarpur were also inundated, with sea water entering hotels and residential areas, besides causing damage to kutcha shops and houses.

Cyclone Yaas, which spared Kolkata unlike last year, was followed by heavy rain in the districts of East Midnapore, South 24 Parganas, North 24 Parganas and Howrah.

Thousands of kutcha houses in coastal villages in Bhadrak, Balasore and Kendrapara districts were washed away in the high tidal surge that accompanied the cyclone's roaring landfall.

"The agriculture suffered heavy loss due to ingress of saline water which affected animal husbandry, horticulture among others. The actual extent of damage will be ascertained in assessment after 72 hours," Ms Banerjee said.

Odisha had shifted 5.8 lakh people to safer places, and West Bengal 15 lakh ahead of the cyclone, amid concerns over spread of Covid-19 infection at the temporary shelters.

The cyclonic storm weakened during the afternoon but hollered on its destructive path towards Jharkhand. The state, already on high alert, continued evacuating low-lying areas during the day amid the forecast that it would be hitting by midnight, officials in Ranchi said.

Yaas is the second cyclonic storm to hit India within a week after Tauktae tore into its western coast, causing death and destruction.

As severe cyclonic storm 'Yaas' enters Jharkhand, the state remains on high alert and has evacuated about 12,000 people to safer zones while operations are still on to minimise damage from the cyclone that pounded neighbouring Odisha and West Bengal, officials said Wednesday. The state has imposed a complete lockdown in some parts to prevent people from venturing out in view of the storm while as many as eight lakh people have already been impacted by it.

"We have evacuated 10,767 persons to 310 shelter homes sites and the evacuation operations are on. A total of 848 of our villages are impacted by it. We are doing our best to prevent any casualty," East Singhbhum Deputy Commissioner Suraj Kumar said.

The Biju Patnaik International Airport in Bhubaneswar and the East Coast Railway, headquartered at the Odisha capital, resumed operations from Wednesday evening, hours after Cyclone Yaas hit the state, officials said. The airport suspended flight services for about 20 hours while the ECoR had cancelled 124 trains in the wake of the cyclone.

The airport issued a notice to airmen (NOTAM) on Tuesday to alert airlines that its flight operations will be suspended from 11 pm to 5 am on Thursday.

The ECoR also decided to run some of the special trains which were cancelled in view of the cyclone.

The Indian Army rescued around 700 people marooned at different places in West Bengal's East Midnapore district, which bore the brunt of cyclone 'Yaas', as large tracts of land in coastal areas of the state were inundated in a storm surge, a Defence official said. Stranded people were also rescued from places submerged in the storm surge in South 24 Parganas and Howrah, he said.

The Army, which has deployed 17 cyclone-relief columns, comprising specialised personnel with equipment and inflatable boats for rescue operations in West Bengal, brought to safety marooned people in Digha and Talgachari in East Midnapore and at Orphuli in Howrah among other places, the official said.

The Indian Coast Guard has also deployed its ships and hovercraft after the cyclone made its landfall in neighbouring Odisha on Wednesday morning. "Three Coast Guard ships along with onboard helicopter, which were on an operational mission in the Bay of Bengal, have been diverted to coastal areas of West Bengal and Odisha with the fastest speed to assess the situation in the area and render appropriate assistance to any mariner in distress," the ICG said.

They will be joined by two more ships of the ICG to augment efforts in the sea.