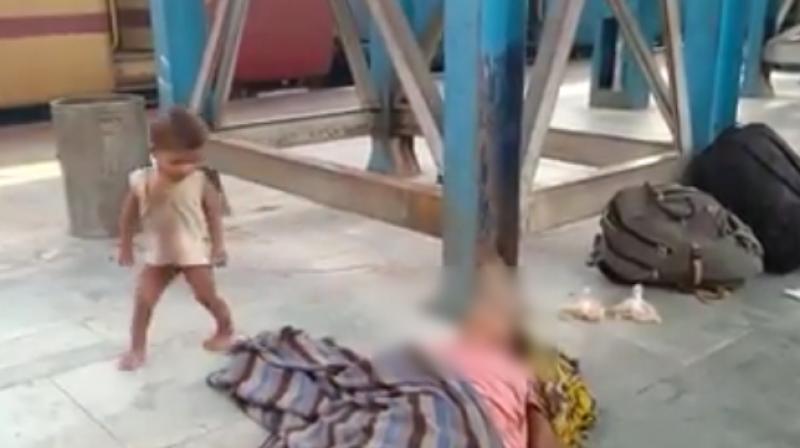 Patna: Amid the coronavirus crisis and lockdown, a heart-wrenching video clip has surfaced which shows the plight of our guest workers returning from other states.

The video shows a child pulling a blanket covering his dead mother while the elder son is seen standing there with a plastic water bottle. The woman is said to have died due to excessive heat, dehydration and hunger.

“Her sister’s husband informed us that the woman was sick and died before the train reached Muzaffarpur. We took the body in our custody and completed all the formalities. The dead body and her family members have been sent to Katihar”, Railway Dy. Sp Ramakant Upadhyay said.

When asked about the cause of death, the railway Dy. SP said that “only doctors can tell you about the reason behind her death. According to her sister’s husband, she was also mentally unstable”.

Muzaffarpur district administration also later issued a statement saying that the woman was not well for the past few days and died of sickness.

This heart-wrenching video from #Muzaffarpur railway station shows a child pulling a blanket covering his dead mother while the elder son is seen standing there with a plastic water bottle. The woman is said to have died due to excessive heat, dehydration and hunger. #lockdown pic.twitter.com/Immc5o6Z3S

Earlier the deceased woman’s relative had told reporters at the railway station that they were returning from Gujarat when the incident occurred. "She was not well and suddenly collapsed inside the train”.

After the video was circulated on social media on Wednesday, opposition parties in Bihar blamed the state government for its failure in dealing with the crisis.

Sharing the video on twitter Sanjay Yadav, advisor to RJD leader Tejashwi Yadav said that “The baby is not aware that his mother wrapped in the blanket will never wake up. His mother had been travelling for four days and died due to hunger and thirst. Who is responsible for these deaths on the train? The opposition should raise such questions or not?”

After the lockdown was announced in March thousands of guest workers set out for their homes either walking, cycling, packed on trucks and or trains. Reports suggest that several of them died while on their way home either in road accidents or due to lack of proper food and water.