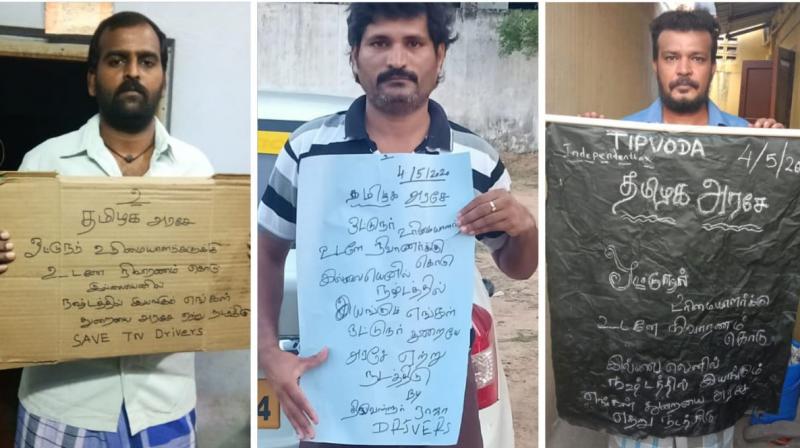 Chennai: The latest layoffs announced by Uber in India, following similar action by Ola earlier, is just the latest blow to the tribe of taxi driver, among the worst-hit sections in the country.

The lockdown may be easing and cities are beginning to go back to work but for the drivers there's much bad news on the horizon.

According to M. Bhoopathi, general secretary of Tamil Nadu Call Taxi Workers Union, at least 1.8 lakh drivers including 60,000 in the call taxi sector and 4000 in the tour taxi field are undergoing tremendous stress as their liabilities are mounting day by day.

"Many non-banking financial companies which financed us have now hiked their interest rates since the Reserve Bank of India announced a moratorium for EMIs. Recently a well-known NBFC sent notices to drivers saying they have to pay additional interest for availing the moratorium. We have decided to challenge this in the courts," he said.

Jude Mathew, State General Secretary, Independent Taxi Drivers and Owners Association, says most of the drivers have given up their jobs, switching to others like health volunteers and wood cutters.

Since the lockdown was announced till now, we have sent 6 petitions to the both Centre and State governments, demanding immediate relief and loan waiver. But none of them yielded any response so far.

Though the Chief Minister has promised 1000 compensation and relief materials to those who affected, most of them are still waiting for it. Only 83,000 drivers out of 1.8 lakh have received it. Many of them got just Rs 1000 so far’, he said.

According to Mathew, it will be very difficult to bring these drivers back to business as they are mentally unfit. ‘They have endured enough now. If they back to the business, they will have to dive with heavy heart that would ultimately affect their safety as well’, he points out

38-year-old S. Sampath, a taxi driver who migrated from Viluppuram to Chennai 13-years ago to earn livelihood, is now facing eviction from the rented house.

"I did get Rs 1000 and 15 kg rice in March but nothing else. Only emergency travelling is allowed now. Even for that, the e-pass is required. Getting e-pass for people has now become a herculean task. I have got the relief as I am a registered driver. Majority of the drivers were not members of the welfare board.The landlord keeps asking for rent. He is not in the mood of tolerating the excuse of lockdown for non-payment of rent. The government should immediately provide permission to operate the call taxis with all safeguards”, he added.

The case of call taxi drivers works in Multi National companies like Ola and Uber is no different. Many of these drivers have already started facing music of the gig economy even before the lockdown.

Attracted by hefty offers, many had taken up the job full time and went on purchasing cars on loan, migrating to Chennai for a living. But the harsh reality has started haunting them.

Harikrishnan, who has been Uber driver for last three years at Pallavaram here, has no job since the lockdown announced. He got Rs 3000 as relief from the company, but, he says, it’s a pittance to run a family. Before the lockdown, I had earned Rs 800 if I did work for 14 hours a day. Now, I don’t know when the life back on track. Nobody in the company has enquired about our situation. No EMI, insurance premium, taxes have paid. I haven’t got the car serviced due to the cash crunch’, he says.

He says that even if the lockdown is lifted running the business will be extremely difficult as 95 percent IT firms opted to work from home. The companies don’t care if the drivers and their families are starving or alive’, he laments.