Amidst the political 'tu-tu, mein-mein', the plight of the guest workers continues to trouble the conscience of the Indian nation. 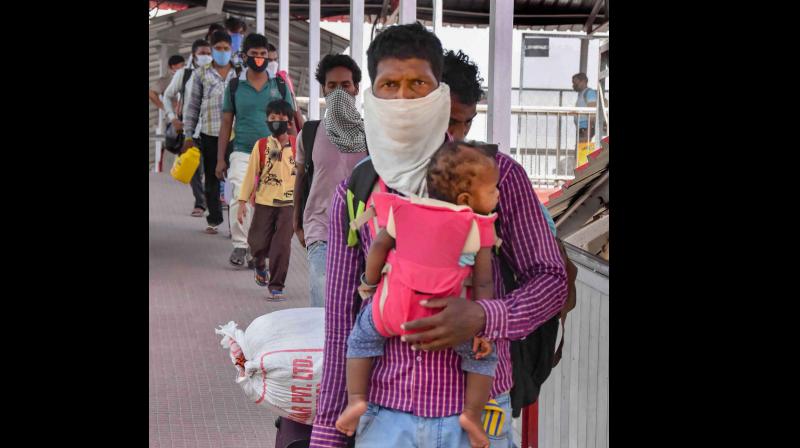 A migrant carrying his child arrives to board a local passenger train at Danapur railway station to reach his destination. (PTI)

In the last week of April, some news reports suggested that coronavirus cases were stabilising in Uttar Pradesh – India’s most populous state. With only 2,328 confirmed cases on May 1, it seemed as if Uttar Pradesh was able to keep its tally largely under control.

However, the next day, a first Shramik Train carrying 700 odd guest workers reached Charbagh and inadvertently launched a spurt in Covid-19 cases that continues till date. Since May 1, Uttar Pradesh has seen a 179 per cent increase in positive cases – from 2,328 to 6,497 cases in just 25 days.

Reports from Uttar Pradesh suggest that samples of over 54,000 returnees have been collected, out of which 1,663 tested positive. This roughly translates to over 60 percent of the cases being traced to migrants coming from states like Maharashtra and Gujarat – both India’s worst-affected states.

The trend is similar in other eastern states like Bihar, Odisha and West Bengal. These states, too, recorded comparatively fewer cases than their economically better-off counterparts like Maharashtra, Gujarat or Tamil Nadu before the migrant influx began in early May.

Bihar, which just had 466 cases on May 1, now has over 2,800 confirmed cases – an exponential increase of 615 per cent in less than four weeks. Moreover, the number doubled from 1,033 on May 15 to 2,166 on May 22.  According to state government officials, guest workers returning from Covid-19 hotspots constitute over 60 per cent of the total positive cases recorded so far. Over 1,000 out of the total cases are of guest workers returning from just three states – Maharashtra, Delhi and Gujarat.

While it is understood that the migrant influx during Lockdown 3.0 has led to the spread of the virus in these two states, a deeper scrutiny also suggests an sub-regional disparity.

Similarly, poorer districts of North Bihar like Madhubani, Darbhanga, Sitamarhi, Purnea and West Champaran did not record any cases up to the last days of April. But once the guest workers began to enter, these districts recorded a spurt in positive cases.

This apparent spurt in the poorer region of the two states could be linked to the fact they contribute heavily to the labour market in the prosperous Western and Southern states. Harvard University professor Sai Balakrishnan, in a recent Harvard blog, made an interesting observation worth noting: “These long-distance journeys of distress migration reveal a spatial rift. The regions that expel distress labor form a swath along the eastern side of the country, stretching from the poor districts of north Bihar and Uttar Pradesh (districts bordering Nepal), down to…Odisha.”

Odisha, statistically, is a curious case of extremes. Until May 1, the state had recorded just 154 cases. Ganjam district, which is now the biggest hotspot, had zero cases until May 3. But once guest workers from Gujarat began to return, the district recorded over 200 cases in less than a week. In the last three weeks, Ganjam has recorded 358 cases. Notably, the state recorded its biggest spike till date on Monday, when 103 cases were detected. Ninety-six of them being guest workers. The coastal state now has 1,517 confirmed cases, which is a whooping 885 per cent increase since May 1.

Further east, West Bengal, already battered by Cyclone Amphan, has witnessed a three-fold increase in the number of positive cases since the beginning of the month. The state has recorded a 404 per cent increase in confirmed cases – from 795 on May 1 to 4,009 on Tuesday. While the first Shramik Train carrying over a thousand guest workers reached West Bengal on May 5, it is unclear how many cases are directly or indirectly linked to migratory factors. Nevertheless, West Bengal has garnered undue attention in national media due to the ongoing spat between the Centre and the state government over these special trains.

Amidst the political 'tu-tu, mein-mein', the plight of the guest workers continues to trouble the conscience of the Indian nation.