The March 21 attack was one of the deadliest by Maoists on security personnel in recent times. 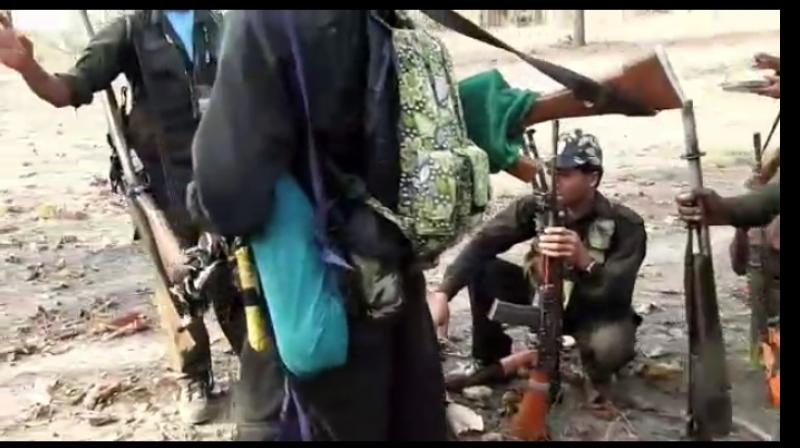 A screengrab of the video.

Bhopal: Naxals on Tuesday released a chilling video of the March 21 encounter with security personnel in Minpa jungle in Chhattisgarh’s south Bastar district of Sukma in which 17 jawans were killed.

The 12.15 minute-video showed the armed ultras opening fire on the jawans taking trees in the forest as covers, turning a patch of jungle into ‘war zone’.

Some of them were also seen perching themselves treetops to target the security personnel.

The Maoists, including women, were seen encircling a particular area while mounting attack on the security personnel who were not visible in the video clip.

Bodies of two jawans were seen strewn around in the video clip as the rebels marched forward.

The encounter appeared to have taken place on the outskirt of a village as the Maoists were seen coming out of thatched houses to attack the security personnel.

The Maoists also showcased 14 assault rifles and large quantities of ammunitions looted by them from the slain jawans, in the video.

The Dandakaranya zonal committee of Maoists has claimed to have made the video during the encounter.

When contacted, Bastar range inspector general of police P Sunderraj said, “Police was probing into the video. We have identified Maoists who had taken part in the encounter in the video. Maoists usually release such videos to keep morale of their shrinking cadres high”.

Seventeen personnel of district reserve group  (DRG) were killed in the ambush by Naxals on security forces in Minpa forest in Sukma district on March 21. This was one of the deadliest attacks by Maoists on security personnel in recent time in Bastar.