India   All India  27 May 2020  Bengaluru cop catches two thieves, and the coronavirus from them
India, All India 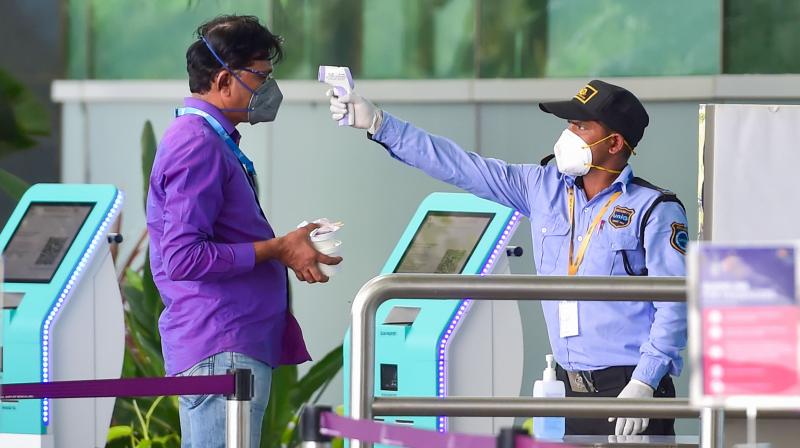 The 57-year-old assistant subb-inspector of the Hebbagodi police arrested two men for stealing iron rods and other materials from a construction site on May 16. PTI Photo

Bengaluru: A policeman of Bengaluru cracked a case of theft and the two culprits. But in doing so, he acquired the coronavirus from them.

The 57-year-old assistant subb-inspector of the Hebbagodi police arrested two men for stealing iron rods and other materials from a construction site on May 16.

After they were arrested, they were remanded to judicial custody. As per the norms, before being lodged in jail, the duo were tested for the coronavirus.

Their test results came as a shocker as the duo, who were residents of Bengaluru's first containment zone Padarayanapura, tested positive. Nearly 20 cops attached to the station including the ASI were quarantined and the whole station was sanitized.

Now, the ASI's results have come positive, leaving many cops like him in the city in a state of dilemma whether to carry out their duty or to abstain from it for the time being. He is admitted to designated hospital for treatment.

That case of the cop who caught the contagion was just one of the 122 cases reported in Karnataka today. These are fairly distributed right round the state: 28 are from Kalburgi, 16 from Yadiri, 15 from Hassan, 13 from Bidar, 11 from Dakshina Kannada, 9 from Udupi, 6 each from Uttara Kannada and Bengaluru, 5 from Raichur, 4 from Belagavi, 3 from Chikkamangaluru, 2 each from Vijayapura and Bengaluru Rural, one each from Mandya and Tumakaru.

The total cases in the state now number 2405.

Maharashtra continues to add cases to the state, with 109 out of the 122 fresh cases getting reported on Wednesday. Mandya which was leading the chart these days with Maharashtra returnees has slowed down with one fresh case, while Kalburgi is feeling the heat with all the 28 cases from the district being interstate travellers from Maharashtra.

Two cases from Bengaluru are international travellers who returned from Nepal and UAE.

A 69 year old female resident of Yadagiri district who returned from Maharashtra who was brought dead to the designated hospital on May 20 has tested positive for Corona. With her death, the total death tally is 45.