The forest officer has a few other botanical discoveries to his credit. 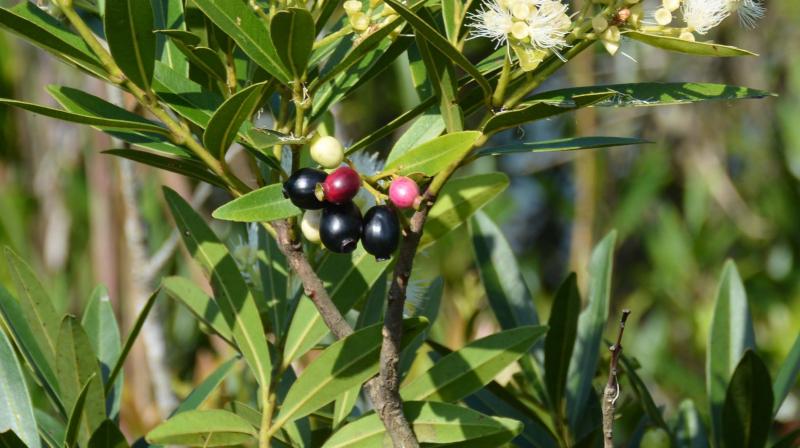 Stressing the need of futher study on medicinal value of this new plant of Jamun, Mr Sarma said that plant has potential to become alternative to Jamun also known as to be medicine of diabetes, world’s fastest growing disease.

Guwahati: A new plant that could be an alternative to Jamun with higher medicinal value has been discovered in Assam.

The discovery has been published in one of the world’s oldest journal of Paris — Adansonia, a peer-reviewed journal of plant biology, devoted to the inventory, analysis and interpretation of vascular plants biodiversity.

Noted research scholar Jatindra Sarma while posted in Karbi Anglong as district forest officer had spotted the new rheophyte species, which is restricted to the Kopili ri-verbed of West Karbi An-glong district of Assam. He was assisted in his research work later on by his associate scholars Hu-ssain Ahmed Barbh-uyan and Santanu Dey also.

During field explorations (2016-2018) at Koka, Panimur, Amreng and Zirikindeng regions of West Karbi Anglong district of Assam, the senior author found this rheophytic shrub growing on rock crevices at the edges of Kopili riverbed near Koka.

Observations in the field and critical examination of the voucher specimen have revealed a  number of morphological differences from all other hitherto known species of genus Syzygium (Jamun), which warrants the description of a new species, the jouranal of plant biology said.

The species is named after Mrs Niva Deka, the wife of first author of the paper, who constantly encouraged her husband to continue his botanical explorations in remote area of the state of Assam. By profession, Mrs Deka is an Engineer and presently working under the government of Assam.

Mr Sarma, who is currently serving as Conservator of forest at Tezpur in central Assam is also looking after the state medicial Plant Board, Assam as thr member secretary.

Stressing the need of futher study on medicinal value of this new plant of Jamun, Mr Sarma said that plant has potential to become alternative to Jamun also known as to be medicine of diabetes, world’s fastest growing disease.

The forest officer has a few other botanical discoveries to his credit. These include the rare, ginger-like Amomum pratisthana named after his daughter, and the Smilax sailenii named after Prof. Sailen Borah, one of Assam’s best known botanists.

Mr Sarma has also published the two-volume Medicinal Plants and Mushrooms of India with special reference to Assam. It contains information on 1,400 medicinal plants and mushrooms, including Costus pictus or the insulin plant used in treating diabetes mellitus, and Ophiorrhiza mungos used in treating cancer because of the alkaloid Camptothecin present in it.