Modi said that it was the faith of the people that had guided and inspired him to take difficult decisions in the past three years. 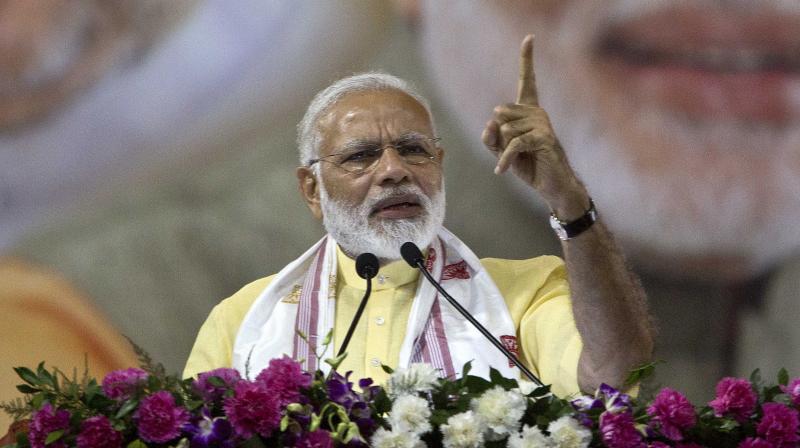 Guwahati: Completing three years in power and flushed with electoral victories, Prime Minister Narendra Modi on Friday decided to address the nation from Assam with the message of gratitude for people’s support for him and his government till now, and vowing to fulfil all his promises.

Addressing a huge public rally in Guwahati, Mr Modi, in his hour-long speech, presented his government’s report card, explained the major initiatives taken, and got emotional while speaking of his commitment to ensuring the well-being of 125 crore countrymen.

Earlier in the day, Mr Modi put out statistics related to various sectors to show comparisons between 2014 and now, and he invited the public to participate in a survey on his NarendraModi App about the performance of his government. “Sath hai, vishwas hai, ho raha vikas hai (There is cooperation, there is confidence and progress is being made),” the Prime Minister tweeted.

Referring to Make-in-India, the graphic said that there has been a “giant boost” to investments in electronic manufacturing.

Marking the third anniversary of his government in the Northeast, Mr Modi said that it was the faith of the people that had guided and inspired him to take difficult decisions in the past three years, and added, “I am committed to fulfilling the assurances given to the people of my country.”

Keeping his eyes firmly on the poor and the backward, the Prime Minister spoke of his government’s move to set up the OBC Commission, while regretting that the previous government had ignored this demand.

“I have noticed that people have become a part of the administration in these three years,” he said, and went on to thank people for supporting demonetisation — a tough decision that, he added, was successful because of “people’s blessings”.

“There were attempts to provoke the countrymen against demonetisation, but they failed,” he said.

Reiterating his faith in his countrymen, Mr Modi said that the drive against black money and corruption would continue. “I will extract all benami property and black money that has been built by looting the public exchequer,” he said, adding that he was prepared to face any kind of challenges and difficulties to fulfil this assurance to the people.

“When I came to power three years ago, I spoke about cleanliness, I spoke about toilets, some people were stunned and some were laughing. They said what kind of PM is this. But now it has become a movement in the country,” he said, and added, “I need your pro-active support for my mission — New India.”

“When we came to power, there was only disappointment everywhere. People thought nothing will change and had made peace with it. However, now everything has changed. Indians believe that we will become a global power.”

In a speech that was often evocative and left many in tears, Mr Modi said, “I have experienced and understood the pains that the common man goes through. I intend to do big things for the small people.”

While referring to the investment of more than Rs 3,500 that Assam got in a day after the inauguration of a bridge and laying the foundation for an AIIMS and IARI (Indian Agricultural Research Institute), Mr Modi said this is how his government intends to work. He added that satellite programmes in India have been going on for the last so many years, but it was now that India had succeeded in attracting global attention by launching 104 satellites in one go.

Assam chief minister Sarbananda Sonowal, Arunachal Pradesh chief minister Pema Khandu and Manipur chief minister N Biren Singh were also present at the rally, which was attended by a large number of people, who braved heavy rains to listen to the Prime Minister.