India   All India  27 May 2017  PM Modi inaugurates longest bridge of India in Assam
India, All India

The bridge will be instrumental in quick movement of troops to the border with China in the Wallong-Kibithu sector of Southern Arunachal Pradesh. 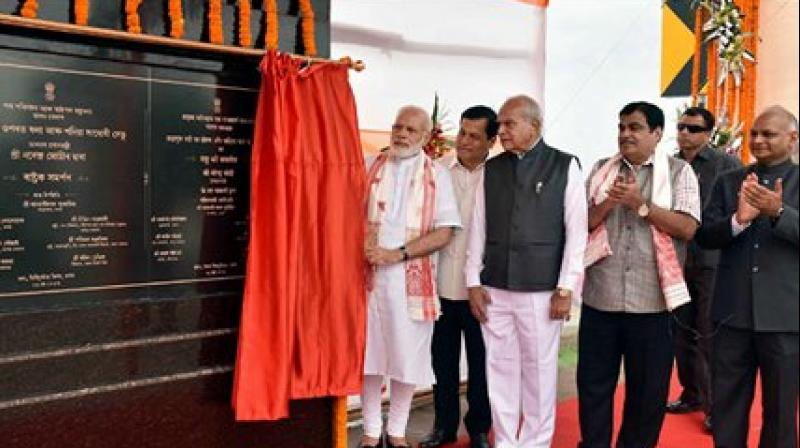 Prime Minister Narendra Modi unveiling the plaque to mark the dedication to the nation of the Dhola-Sadia Bridge, across River Brahmaputra, in Assam. Assam Governor Banwarilal Purohit, the Union Minister for Road Transport & Highways and Shipping Nitin Gadkari and the Chief Minister of Assam Sarbananda Sonowal are also seen. (Photo: PTI)

Guwahati: Prime Minister Narendra Modi on Friday dedicated the longest river bridge of India, Dhola-Sadia Bridge on Brahampautra, to the nation. He also named the bridge after balladeer Bhupen Hazarika.

Apart from reducing the distance between Assam and Arunachal Pradesh by 165km, the 9.15km bridge has also been designed to facilitate the movement of battle tanks. The bridge will be instrumental in quick movement of troops to the border with China in the Wallong-Kibithu sector of Southern Arunachal Pradesh.

Former Prime Minister Atal Behari Vajpayee had given the sanction for the bridge in 2004 but construction on the project, worth Rs 950 crore, could start in 2011 only. 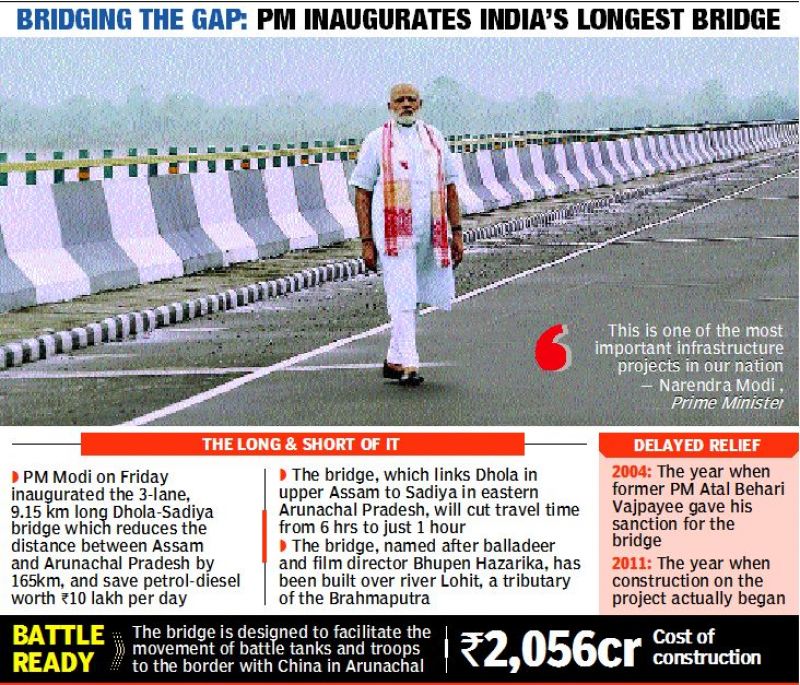 Mr Modi pointed out, “In 2003, one of our MLAs Jagdish Bhuyan wrote to Vajpayee ji requesting for such a bridge. He approved. Then soon government at the Centre changed and the work on the bridge kept on getting delayed.”

Referring the delay, the PM took a dig at the previous UPA regime, “If the Vajpayee government had been re-elected in 2004, the construction of the bridge would not have got delayed. You may have got this bridge 10-years back.”

The bridge will fill a huge connectivity gap that existed in the region. So far, the only means of connectivity in the area was ferry services on Brahmaputra.