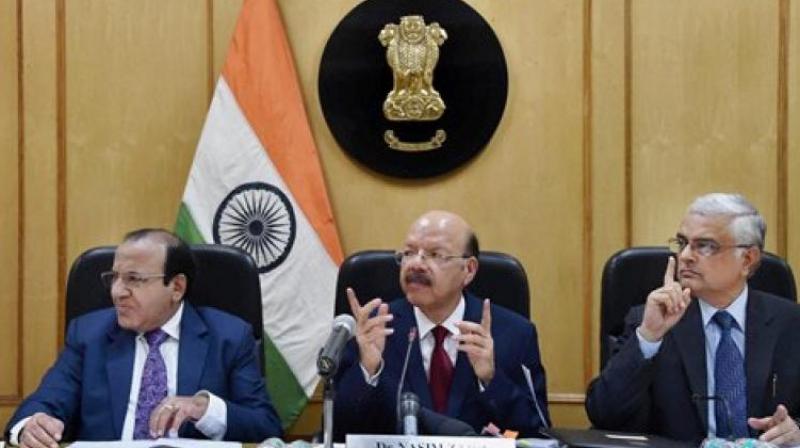 The poll panel said that the EVMs need to be picked from its warehouses in Delhi at parties' own cost. (Photo: PTI)

New Delhi: The Election Commission of India (ECI) on Saturday said that no promise to hold unbarred Electronic Voting Machine (EVM) Hackathon was made, which is being claimed by the Aam Aadmi Party (AAP).

"About a 'promised no-holds barred Hackathon', it's clarified that no such 'promise' was ever made or announced by the commission," EC said.

Further commenting on party's demand to change the motherboard of the voting machine, the Election Commission said that the changing internal circuit of electronic device is just like changing device itself.

"EC specified that EVM challenge will be conducted within framework of existing administrative safeguards & security protocols," the Election Commission said.

Earlier on Friday, the Election Commission rejected the request filed by the Rashtriya Janata Dal (RJD) to take part in the EVM hackathon challenge.

"We received the RJD's email at 5:39 pm (applications were to be received by 5 pm). Accordingly their application is not entertainable," the EC said.

Meanwhile, the Communist Party of India (Marxist) has also expressed their interest in participating in the challenge.

Total eight political parties' applications have been accepted by the poll panel to hack the EVM.

The Election Commission informed that the Nationalist Congress Party (NCP) has nominated its three representatives for participating in EVM challenge.

"The AAP and the Congress raised some issue but as per existing framework of challenge, they did not express their interest in participating," stated EC in a press note.

The EC said that the NCP have not chosen any EVMs as per the framework and has left it to the polling commission.

Earlier, the poll panel had asked the opposition parties and experts to prove that the EVMs, used in the assembly elections, can be tampered with.

However, the EC put forth terms and conditions for the parties attempting to tamper the machines.

The EC said that only those parties, national and regional, that took part in the recently concluded assembly elections can hack the EVMs.

The poll panel said that the EVMs need to be picked from its warehouses in Delhi at parties' own cost.

Each political party was allowed to pick at least four EVMs of their choice from any four polling stations out of the five poll-gone states. The EVMs involved in the election petition or those sealed will not be allowed in the hackathon.

The poll panel said that if the EVM becomes non-functional after the tamper attempt or if the tamper result is same as the one put out by EC or if the challenger violates the rules-set, the challenge will be struck down.