‘My son will be back once mission is accomplished’

Bhim Army founder has gone underground after clashes with police. 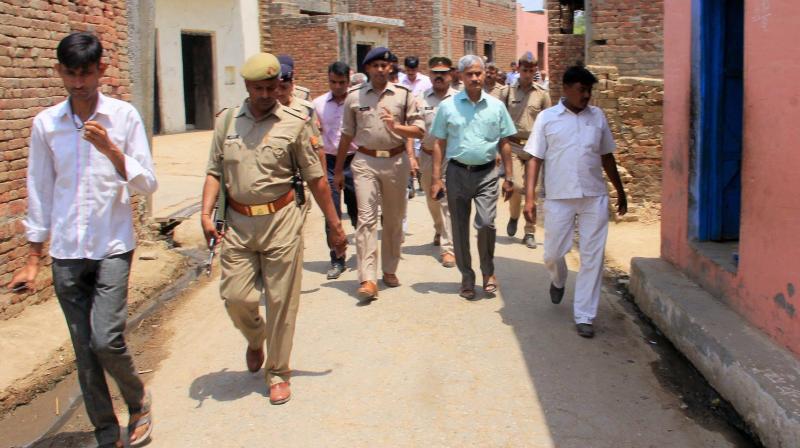 Administrative officials and the police patrol in the violence-hit Sabbirpur village of Saharanpur district. (Photo: AP)

Saharanpur: He has been named in one of the FIRs filed by the police for inciting violence and instigating dalit youth. He has gone underground following a skirmish with the police in Saharanpur on May 9. Fingers are being pointed at his outfit — Bhim Army — for the recent clashes between dalits and Thakurs at Shabbirpur village in Saharanpur area. Yet for his family, he is a man on a mission.

Chandrashekhar Azad, the founder of Bhim Army, shot to national limelight after his call for protest against dalit atrocities at Jantar Mantar recorded a huge gathering. Azad called for the rally on May 20 while being underground. The turn out suprised many and Azad was instantly being viewed as a “threat” to the dalit queen — BSP chief Mayawati.

His family living in Saharanpur’s Chhutam-alpur village is firmly behind him. “My son is working for a cause and I support him completely,” his widowed mother, Kamlesh, said.

She’s worried, yet she is hopeful. She claimed her son will be back once his mission is accomplished.

“I don’t know where my son is. He hasn’t come home since May 9. He is untraceable and I don’t know who to ask. He had left the home saying he will return once his mission is accomplished,” she said.

Aazad’s father, who was a teacher, died of cancer in 2011. “My husband also faced discrimination till last breath even in the hospital,” she shot back while defending her son.

Bhim Army was founded by Azad, a 31-year-old law graduate from a university in Dehradun, in 2015. At this juncture, the membership, as being claimed by Bhim Army, is around 40,000. The mother said that the zeal to fight against injustice and discrimination was inherited by her sons from their father. That’s the reason, the elder was named Chandrashekhar Azad and the younger Bhagat Singh. The younger son is an undergraduate.

In their small temple at home there were framed pictures of Sant Ravidas and B.R. Ambedkar instead of Hindu gods. As one enters their house, “Bheema”, the icon of dalits from Mahabharata, can be seen painted on the door.

Azad’s mother claimed that her son was “working for the bettement and welfare of the dalits. And that is the reason the administration is after him”.

Another key leader, Vinay Ratan, an MBA graduate and national president of ‘Bhim Army’  could be contacted only over the phone.  Fearing arrest, Ratan has also gone
underground.

In a telephonic conversation he categorically denied of having any links with the BSP, as was being alleged by the Uttar Pradesh government. “We have nothing to do with BSP,”

Ratan said. He claimed that “after witnessing exploitation and social negligence of Dalits educated and jobless Dalit youths came together to form Bhim Army.”.

Talking about the initation, Ratan said; “We take special classes for Dalit youths after their school hours. We assist families in distress by helping them financially and also
provide legal help and arrange education for girls and often financially help in their marriages.” added Ratan.

As for funding, Ratan claimed that it comes from “donations from Dalit families” and added; “We never demand money  from any political organization.” He of course denied
any involvement of Bhim Army in the Saharanpur violence. “It’s wrong to link the organization with any violence.” For him, the recent violence was “another example of
Upper caste atrocities  against Dalits.”