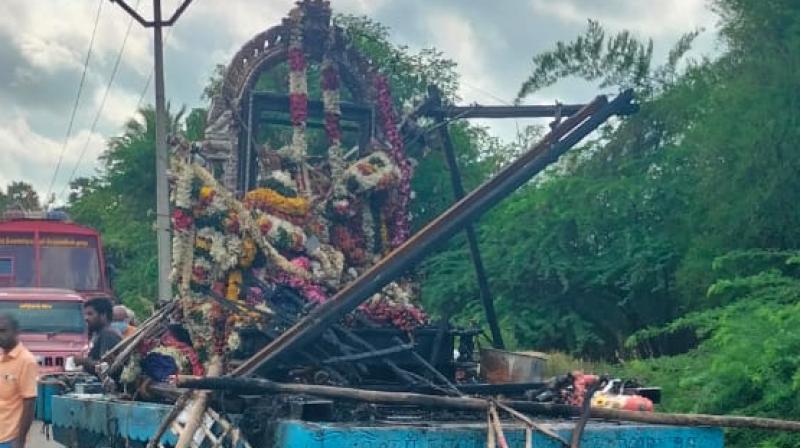 Ill-fated chariot which came in contact with high tension power line at Kalimedu village near Thanjavur on Wednesday morning. (DC)

Thanjavur: An FIR has been registered and an investigation has started in connection with deaths due to electrocution during the chariot procession in Appar Swami temple of Tamil Nadu's Thanjavur on Wednesday.

"A total of 11 people have died. Three people died on the spot and seven died in the hospital. 15 people are injured and have been taken to Thanjavur Medical College for treatment. FIR has been filed and an investigation into the matter has started," said V. Balakrishnan Inspector General of Police, Tiruchi Range.

The police official said that the incident occurred after the temple car came in contact with a high voltage power line and went up in flames.

"Prima facie it suggests that some high tension wire came in contact with the temple car (of chariot festival) during the annual chariot festival in the Kallimedu village," said Balakrishnan.

"The temple car was negotiating a turn and faced some obstacle before being reversed when it came in contact with the overhead line," he added.

Meanwhile, Tamil Nadu Chief Minister MK Stalin on Wednesday said that he will visit Thanjavur to inspect the ground situation and meet the injured and the families of the deceased in the electrocution incident.

"I will go to Thanjavur this afternoon to meet the injured people and family members of the victims," MK Stalin said in the Tamil Nadu Assembly.

Stalin informed the assembly that he has instructed state minister for School Education, Anbil Mahesh Poyyamozhi, to oversee the relief operations.

"I have instructed my colleague minister Anbil Mahesh Poyyamoezhi to reach the spot and oversee relief operations; have already announced Rs 5 lakh each financial assistance for people who passed away,' he said.

Tamil Nadu Assembly observed a 2-minute silence for the deceased.

President Ram Nath Kovind and Prime Minister Narendra Modi expressed their condolences and the PM announced an ex-gratia of Rs 2 lakh each to the next of kin of the deceased.

"Deeply pained by the mishap in Thanjavur, Tamil Nadu. My thoughts are with the bereaved families in this hour of grief. I hope that the injured recover soon," the Prime Minister's Office tweeted.

"An amount of Rs 2 lakh each from PMNRF would be given to the next of kin of those who have lost their lives due to the mishap in Thanjavur, Tamil Nadu. The injured would be given Rs 50,000," PMO further said in a tweet.