The Prime Minister, who is seeking a second term from Varanasi parliamentary constituency, had disclosed a total assets of Rs 1.65 crore in 2014. 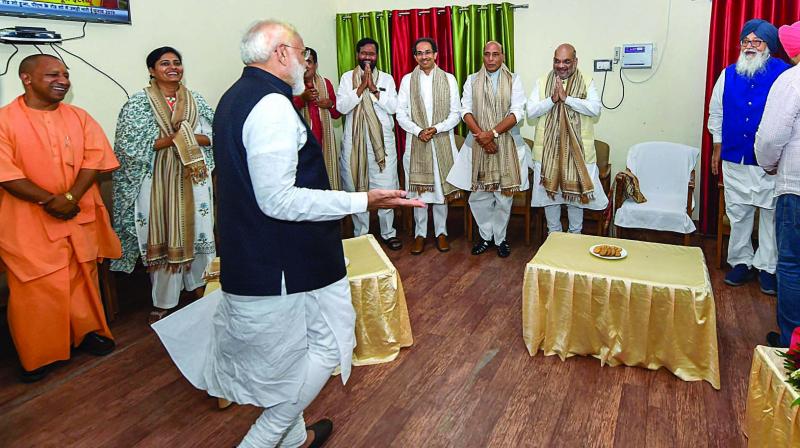 Varanasi: A day after the BJP’s show of strength in Varanasi, the BJP-led NDA on Friday showcased its united face with the top alliance leaders in attendance ahead of Prime Minister Narendra Modi filing his nomination papers to recontest from the prestigious parliamentary seat in Uttar Pradesh as well as in the Poorvanchal region.

Mr Modi had participated in a grand roadshow on Thursday covering nearly seven kms in the old city. The BJP had won 26 out of total 27 parliamentary seat falling in Poorvanchal in 2014 general polls.

Senior BJP leaders, including Union ministers Rajnath Singh, Sushma Swaraj, Nitin Gadkari, Piyush Goyal and J.P. Nadda were also present. Both Mr Modi and Mr Shah touched Mr Badal’s feet. According to his affidavit filed with the Election Commission on Friday, Mr Modi has assets worth `2.5 crore including a residential plot in Gujarat’s Gandhinagar, fixed deposits of `1.27 crore and `38,750 cash in hand.

Mr Modi named Jashodaben as his wife and declared that he has an M.A. degree from Gujarat University in 1983. The affidavit also said he is an arts graduate from Delhi University (1978) and passed SSC exam from Gujarat board in 1967.

The Prime Minister, who is seeking a second term from Varanasi parliamentary constituency, had disclosed a total assets of Rs 1.65 crore in 2014.

“I express deep gratitude towards the people of Kashi. They have again blessed me after five years. Such a grand roadshow yesterday was possible only in Kashi. If you don’t take four-five hours of the night into account, then this roadshow went on for 12-15 hours.”

He also thanked the NDA allies in a tweet: “I thank our valued NDA allies, Cabinet colleagues and Party leaders who came to extend solidarity today. Their support is always cherished.”

Mr Shah, whose party has often faced flak from its allies for not seeking their opinion on key government decisions, thanked the “NDA family” for joining it on the “historic occasion.” He tweeted: “Stronger NDA for a better India” with the hashtag #DeshModiKeSaath.

Earlier in the day, Mr Modi addressed the party’s booth workers where he announced “Kashi to kal he jeet liya,” and now the big task is to “win all the booths”.

He asked party workers to treat themselves as the Varanasi candidate as “aapka candidate to ab bhaag jayega (your candidate will leave now),” and make sure that record polling takes place on May 19, when Varanasi goes to polls in the seventh and final phase of voting for the 2019 general elections.

He also said that the country is witnessing “pro-incumbency for the first time” as it’s the people who are contesting.

In his more than half-an-hour long address, Mr Modi set three tasks for the party’s booth workers to “break some records this time.”

“Some records need to be broken. It doesn’t matter whether Modi gets highest number of votes or not, but democracy must win and highest number of voting should be recorded. One thing that I couldn’t do in Gujarat I want you to do. Five percent more women should cast their vote because not only matr rahati (women power) give me blessings, but it’s my strongest armour,” said the PM and added that it is the duty of the booth worker to make sure that first-time voter feels included in the festival of democracy.

Asking “Modi ke sipahi (cadres)” to respect opponents as they also strengthen democracy, and avoid bragging, Mr Modi took a dig at the Congress saying, “Henkdi marne wale 400 se 40 par pahunch gaye (those who used to brag are now at 40 from 400 seats).”

“Let them badmouth me, but you don’t react... dosti, prem politics main zaroori hai. I know how to turn bad things into manure and help the lotus bloom,” said the PM.

Showing his humorous side, Mr Modi shared some tips to reduce expenses with party workers. “Main to pucca Amdavadi hoon, single fan double journey wala… Visit houses of at least 10 people in your booth... they will offer you breakfast, read their newspapers, interact, spread party’s message and positive news with them but make sure that  they cast their vote,” Mr Modi said.