However, the DGCA said it was a snag of the auto pilot mode and that it would examine the issue. 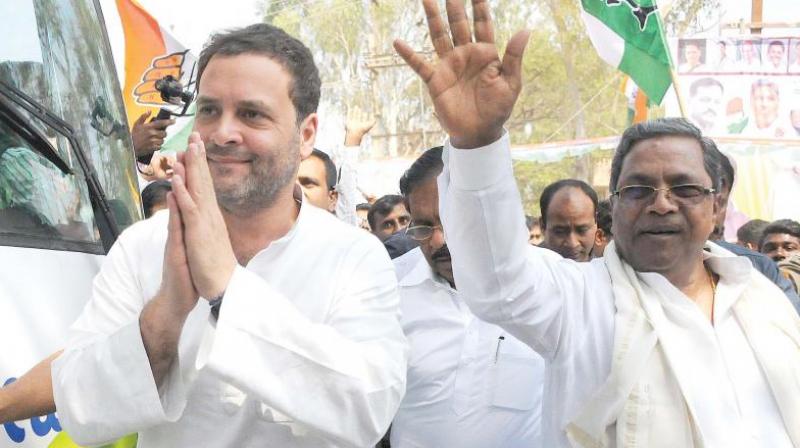 Rahul Gandhi is on a two-day visit to poll-bound Karnataka from today to campaign for the party candidates in the districts of Uttara Kannada, Dahskina Kannada, Kodagu and Mysuru. (Photo: File)

Bengaluru: A plane carrying Congress president Rahul Gandhi on Thursday developed a technical snag with the party demanding a probe into the "suspicious and faulty performance" of the aircraft before landing at the Hubballi airport in north Karnataka.

The Directorate General of Civil Aviation said in New Delhi that it would examine the issue, while the police said they have registered a complaint.

The plane suddenly tilted heavily on the left side and the altitude dipped steeply with violent shuddering of the aircraft body at 10.45 am, Gandhi's close aide Kaushal Vidyarthi wrote in a letter to state DGP Neelmani N Raju.

The letter said the weather was normal and not windy according to the passengers.

"It was apparent from the suspicious and faulty performance of the aircraft that the incidents of shuddering and altitude dipping were not natural or weather-related, but were due to some technical snag...," it said.

"Serious questions related to intentional tampering with the aircraft cannot also be brushed aside and are requested to be addressed and investigated," the letter read.

Gandhi is on a two-day visit to poll-bound Karnataka to campaign for the party candidates in the districts of Uttara Kannada, Dahskina Kannada, Kodagu and Mysuru.

"Yes, we have received a complaint about some unexplained turbulence of the aircraft," Renuka Sukumar, DCP (Law and Order), Hubbali-Dharwad Police said.

She said, "We have registered a complaint under Section 287 (negligent conduct with respect to machinery) and 336 (act endangering life or personal safety of others) of the IPC."

The complaint that names the two pilots was filed by KPCC General Secretary Shakir Sanadi, she said.

The letter said multiple "unexplained" technical snags coupled with the failure of the auto pilot system raised serious issues of aviation safety and possible and intentional tampering with aircraft which endangered the life of its occupants.

"A thorough examination of the structural and mechanical elements of the aircraft, the surrounding circumstances of the flight and the persons attached with maintenance of the aircraft is required in order to assess the incident," it said.

The letter said a "clankish noise" was clearly audible from one side of the plane throughout the shuddering of the aircraft body. "It was learnt that the autopilot of the aircraft was not functioning," it said.

The plane landed at the Hubbali airport around 11.25 am in the third attempt., according to the letter.

"The crew was also apparently petrified and admitted that the flight was particularly frightening and uncommon," it said.

He said a complaint has been sumbitted to the DGP Karnataka asking him to look into all aspects of the "serious, horrific incident", including foul play if any. He said it was unprecedented that a flight carrying an SPG protectee would develop a snag.

Gandhi maintained his composure and tried to calm the co-passengers down, he said. Another complaint has been filed with the DGCA, demanding a thorough inquiry into the incident, Surjewala added.

A senior DGCA official said, "The operator has reported the incident to us (DGCA). According to the operator's report, it was a snag of auto pilot mode and the pilot shifted to the manual (mode) and (the aircraft) landed safely.

"Shutdown of auto pilot (mode) incidents are not uncommon. For any VIP flight, the DGCA examines it in detail. We shall do that here also," the official said.

Citing the report from the Air Traffic Controller, a senior official at the Hubbali airport said the plane had landed safely.