NYAY will cost about 1.8 per cent of India's GDP: P Chidambaram

Stating that details of the scheme will in the manifesto, Chidambaram said: "it will be explained when Congress forms government". 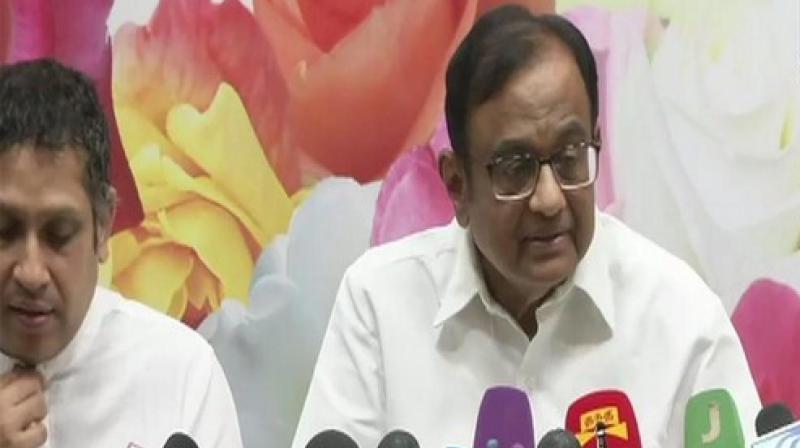 “When NYAY scheme is fully rolled out and all the five crore families are covered, it will cost us about 1.8 per cent of GDP,” said Chidambaram while addressing a press conference here.

Stating that the details of this scheme will be announced in the manifesto, he said: "it will be fully explained when Congress comes in the government".

“We will identify the poorest 20 crore families of India. There would be about 5 crore such families with an average size of five members per family. Hence, this scheme will be benefiting 25 crore people of India. The scheme of this kind could not have been implemented 20 years ago. Today, thanks to liberalisation that was launched by the Congress government in 1991. We believe that the Indian economy has the capacity to implement such a scheme,” said Chidambaram.

Elaborating further on the financial aspects of the scheme, Chidambaram said, “The size of India’s economy today is 200 lakh crore and in nominal term, this size will increase by 12 per cent every year and in about six years it will be double. Hence, the five year period -- starting 2019 and ending 2024 -- the size of India's GDP would have grown close to 400 lakh crore. The amount available to Central and state government will practically double in five years. We have taken into account all factors including the income of different sectors, consumption factors, etc. We have concluded that the Government of India and states should provide Rs 6000 per month to each of five crore families.”

Earlier on Monday, Congress president Rahul Gandhi had announced that if his party comes to power, it will implement a “ground-breaking” NYAY under which 20 per cent of the poorest families of the country will be entitled to up to Rs 72,000 per year.

Describing the scheme as unique in the entire world, he told media here that the minimum income guarantee scheme will be implemented in a phased manner as part of the “final assault on poverty”.