Medical universities in Ukraine charge a fee of Rs 20 lakh- Rs 25 lakh for MBBS course as against Rs. 1 crore charged in India 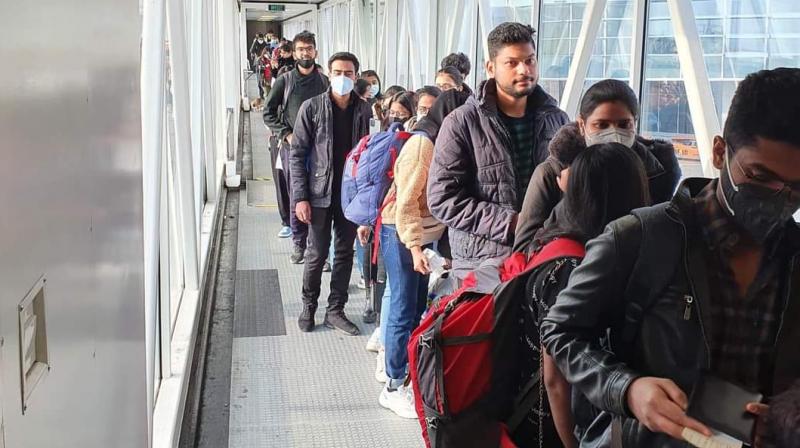 Stranded Indian students from Ukraine waiting to board the Air India evacuation flight. (Photo by arrangement)

Bhopal: The plight of Indian students studying medicine in different universities in Ukraine following invasion of the country by Russia a couple of days ago has brought to focus the low MBBS course fees charged the medical institutions in the war-torn nation.

The medical universities in Ukraine charge a fee of Rs 20 lakh- Rs 25 lakh for MBBS course as against Rs one crore charged by private medical colleges in India, according to Prajjal Tiwari, a student from Madhya Pradesh who is currently studying medicine in Ternopil National Medical University in Ukraine.

Mr Tiwari who arrived in Delhi from Ternopil in Ukraine via Kazakhstan on Thursday said his university charges a fee of Rs 20 lakh for MBBS course.

He is a second year MBBS student of the university.

“In fact, the MBBS fee in Ukraine universities is cheaper than many other medical colleges in foreign countries. That is why Ukraine attracts students aspiring to be doctors not only from India but also from other countries”, Ashish Dhakad, director of ‘Param Education’ involved in facilitating admission in medical universities of Ukraine for students from Madhya Pradesh, said.

Besides, the MBBS degrees in the universities of Ukraine are recognised by the Government of India, he added.

The students who pass out from medical colleges in foreign universities need to clear Foreign Medical Graduate Examination (FMGE) for grant of licence to practice in India by the Medical Council of India.

According to Mr Dhakad, 600-700 students from MP go to 12 countries including Ukraine, Georgia, Kazakhstan, and Philippines every year to study medicine since fees for MBBS courses in these countries are much lower than those charged by private medical colleges in India.

Students from India are heading for foreign universities to study medicine basically due to lack of adequate seats in medical colleges in India, Mr Dhakad said.