UP elections 2022 fifth phase: Over 21 per cent polling recorded till 11 am 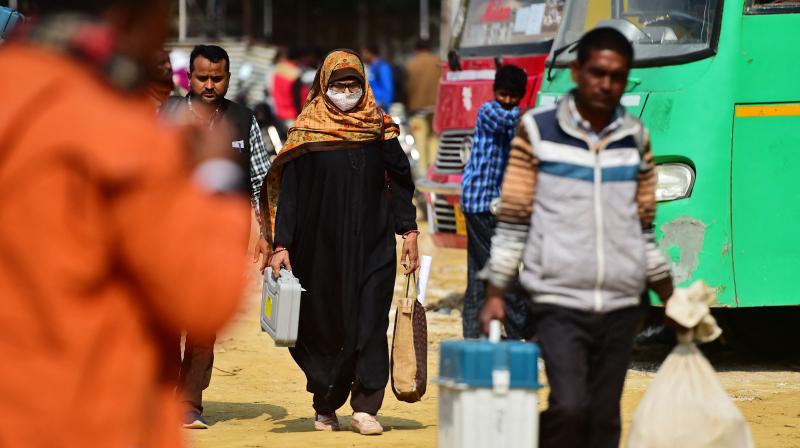 Lucknow: Over 21 per cent polling was witnessed in the first four hours of voting in the fifth phase of Uttar Pradesh Assembly polls for 61 seats spread across 12 districts on Sunday.

As many as 692 candidates are in the fray in this round including Deputy Chief Minister Keshav Prasad Maurya, who is contesting from Sirathu in Kaushambi district. He is pitted against Apna Dal (Kamerawadi) candidate Pallavi Patel.

The voting started at 7 am and will continue till 6 pm. Around 2.24 crore people are eligible to vote in this phase.

The polling percentage till 11 am is 21.29, according to the Election Commission of India's voter turnout app.

The districts where polling is being held are Sultanpur, Chitrakoot, Pratapgarh, Kaushambi, Prayagraj, Barabanki, Bahraich, Shravasti and Gonda.

Amethi and Raebareli, once considered the Congress bastions, and Ayodhya, the epicentre of the Ram temple movement, are among the places where voting is underway.

Raghuraj Pratap Singh, alias Raja Bhaiya, who is the MLA from Kunda since 1993, is once again in the fray as the Jansatta Dal candidate, with old aide Gulshan Yadav contesting against him on the Samajwadi Party ticket.

Union minister Anupriya Patel's mother and Apna Dal (K) leader Krishna Patel is contesting from the Pratapgarh seat. The Apna Dal (K) has entered into an alliance with the Samajwadi Party.

Union minister Patel, heading a rival faction of the party named after her father Sonelal Patel, however, has handed over the seat to the BJP to challenge her mother Krishna Patel.

With the completion of polling on Sunday, Uttar Pradesh will have voted on 292 of the total 403 seats in the Assembly. The last two phases of the elections will be held on March 3 and 7. The results will be declared on March 10.