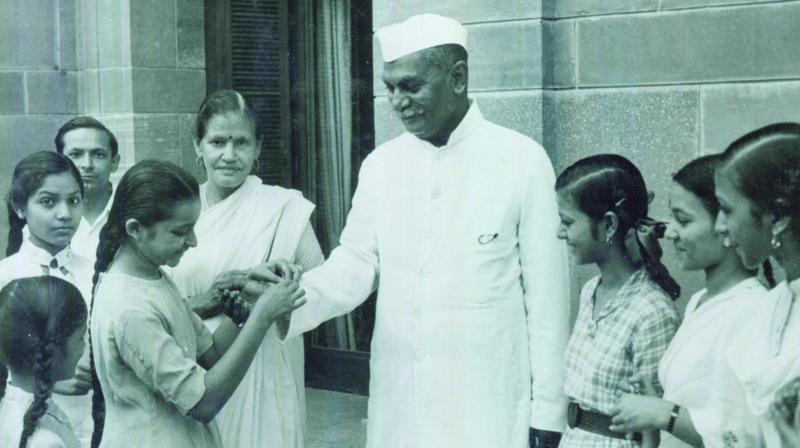 In addition, Prasad was an outstanding legal mind that presided over the Constituent Assembly from which emerged one constitution, and a scholar who wrote three major books: India Divided (a trenchant 1946 critique of the two nation theory), Autobiography — composed in Hindi first as Atmakatha — and At the Feet of the Mahatma.”

The above is in an excerpt from the foreword by historian Rajmohan Gandhi for Dr Rajendra Prasad: First President of India written by B.S.M. Murty. In this brief essay we will examine the role played by Dr Rajendra Prasad as president of the Constituent Assembly and in the making of India’s Constitution of which Dr B.R. Ambedkar, was undoubtedly, the chief architect.

The Madras (now Chennai) session of Congress in 1927, presided by Dr M.A. Ansari had constituted a Committee for drafting a Constitution for India. With Pandit Motilal Nehru as the chairperson of the committee, the report of the committee came to be known as the Nehru Report. It envisaged a parliamentary system of government, joint electorates and a formula for protection of minorities. But, unfortunately for Hindu-Muslim unity, as later events were to prove, the report was rejected by M.A. Jinnah on the question of the quantum of reservation for Muslims.

In the Karachi session of the Congress held under the presidentship of Sardar Vallabhai Patel, a resolution on economic policy and fundamental rights moved by Jawaharlal Nehru was passed. Some of its features were incorporated in the Constitution of India that was adopted when India became a republic in 1950.

The demand for a Constitution of free India continued to be raised in various sessions of the Congress till 1946 when the Viceroy Lord Wavell finally gave in and declared the formation of a Constituent Assembly. The members of the Assembly were chosen on the basis of elections held in 1946.

The first meeting of the Constituent Assembly took place on December 9, 1946. Dr Rajendra Prasad, who was food minister in the interim government was elected as its President two days later. The primary task of the Constituent Assembly was to frame the Constitution of India for which Dr B.R. Ambedkar was chosen as the chairman of the Drafting Committee. A noted historian Granville Austin identifies seven members who were the most influential in drafting the Constitution. These were: Ambedkar, Nehru, Patel, Rajendra Prasad, K.M. Munshi Alladi Krishnaswami Aiyar and B.N. Rau (non member of the assembly), designated as the constitutional adviser to the government of India. Besides these seven members, there was S.N. Mukherjee, who as the chief draftsman was almost indispensable to Ambedkar in preparing the most complex proposals in legal language.

In his magnum opus India: After Gandhi, Ramachandra Guha underlines the importance of Rajendra Prasad: “The third Congress member (after Nehru and Patel) of importance was the president of the assembly, Rajendra Prasad. He was nominated to the assembly on the day after the assembly was inaugurated and held it with dignity until the end of its term. His was an unenviable task, for Indians are better speakers than listeners, and Indian politicians especially so. Prasad had to keep the peace between quarrelsome members and (just as difficult) keep to the clock men who sometimes had little sense of what was trifling and what was significant.”

On December 13, 1946, Pt Jawaharlal Nehru moved the historic “Objectives Resolution” which broadly outlined the seminal spirit behind the Constitution. Moving the resolution Nehru said: “The first task of this assembly is to free India through a new constitution, to feed the starving people, and to clothe the naked masses, and to give every Indian the fullest opportunity to develop himself according to his capacity.” The salient features of the resolution were to draw a Constitution wherein: a) shall be guaranteed and secured to all the people of India justice – social, economic and political; equality of status, of opportunity and before the law: freedom of thought, expression, belief, faith, worship; b) adequate safeguards shall be provided for minorities, backward and tribal areas and depressed and other backward classes.

Finally, I must thank you Mr President for the way in which you have conducted the proceedings of this assembly. The courtesy and the consideration which you have shown to the members of the assembly can never be forgotten by those who have taken part in the proceedings of this assembly. There were occasions when the amendments of the Drafting Committee were sought to be barred on grounds purely technical in their nature. Those were very anxious moments for me. I am, therefore, especially grateful to you for not permitting legalism to defeat the work of Constitution-making.

Prasad himself, in his closing presidential address, was quite generous in his praise for all the members of the Drafting Committee “and especially its chairman, Dr Ambedkar… [who] has not only justified his selection but has added luster to the work which he has done”. In that long valedictory address, Prasad reflected on the “tremendous magnitude” and value of the monumental work of writing the constitution for a country — geographically, culturally and demographically — as vast and diverse as India. He also dwelt on the “salient features of the Constitution” giving broad hints about the possible ramifications of the ‘distribution of powers and functions between the Union and the states’, the inevitable complications regarding the issue of a “national language” vis-à-vis Hindi, and most of all, about the role and powers of the elected president of the Republic. He was candid in his admission about the constitution not being a perfect instrument, but sounding a clear note of warning, he said: If the people who are elected are capable and men of character and integrity, they would be able to make the best even of a defective Constitution. If they are lacking in these, the Constitution cannot help the country. After all, a Constitution, like a machine, is a lifeless thing. It acquires life because of the men who control it and operate it, and India needs today nothing more than a set of honest men who will have the interest of the country before them… Let us launch on this new enterprise of running our Independent Republic with confidence, with truth and non-violence and above all, with heart within the God overhead.

Dr Rajendra Prasad served as President for 12 years and the day he laid down his office on May 13, 1962, was the day when he was awarded the Bharat Ratna by his successor Dr S. Radhakrishnan. A couple of days earlier a public function was organised at Ramlila Maidan to bid formal farewell to Dr Prasad who had held the office of President of India with great dignity and grace. In his address Dr Radhakrishnan said, “Power had not touched Dr Prasad at all. Just as in ancient times Bharat had ruled the people with the image of Rama in his heart — Dr Prasad served and ruled the people with the image of Gandhiji in his heart.”

Dr Rajendra Prasad died in Patna at his Sadaqat Ashram residence on Feb 28, 1963. At a public meeting held in Patna on March 6 to condole his demise, Prime Minister Jawaharlal Nehru paying rich tributes to the first President stated that he had 45 years long association with Dr Prasad who was like his elder brother. Earlier, Pt Nehru had said: “They had been fortunate to work under Dr Prasad’s guidance during the formative period in India’s history.” No wonder, Babu Jagjivan Ram, former deputy prime minister and India’s longest serving Union minister (1946-79), remarked in a biographical sketch of Rajendra Prasad that “he was an asset to Prime Minister Jawaharlal Nehru”.

The writer, an ex-Army officer and a former member of the National Commission for Minorities, is a political analyst based in New Delhi