Eerie calm in Delhi as toll rises to 27

While the administration appealed for peace, the body of an IB employee was recovered from a culvert at Chand Bagh area Wednesday morning. 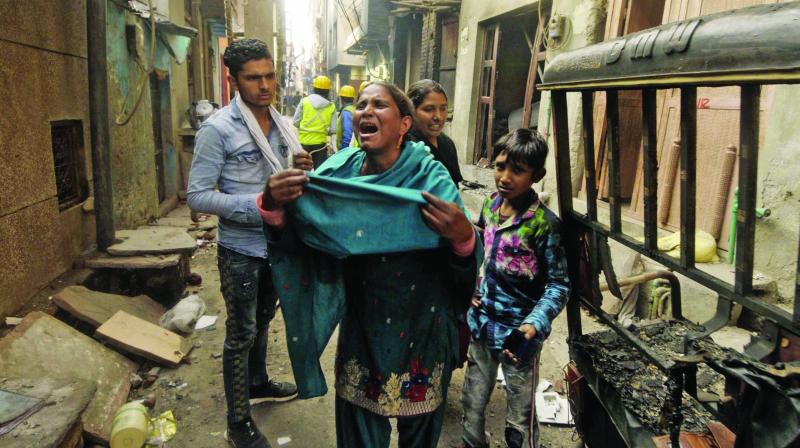 People react after their houses were torched by a violent mob at Karwal Nagar in Northeast Delhi on Wednesday. (Photo: Pritam Bandyopadhyay)

New Delhi: As the death toll steadily rose to 27 and over 200 are reportedly injured, an eerie calm prevailed in the entire riot-hit northeast Delhi on Wednesday morning, after nearly three days of unchecked communal conflagration that has left in its wake not just charred remains of homes, business establishments, and even entire localities in Jafradabad, Maujpur, Chand Bagh, Karawal Nagar, but also a delicately maintained harmony.

After US President, Donal Trump’s departure last night, Prime Minister Narendra Modi, on the third day of riots, reacted for the first time and appealed for peace and brotherhood.

While the administration appealed for peace, the body of an IB employee was recovered from a culvert at Chand Bagh area Wednesday morning.

While who killed whom will remain a matter of endless police inquiries and judicial probes, the Delhi Police said that it has arrested 106 people for their alleged involvement in the violence and registered 18 FIRs.

Chand Bagh, which was one of the busiest areas, teeming with people from all communities and known for its frenetic pace, has turned into a ghost town. Frightened residents peeped from behind half-closed doors and windows. Shops, schools, and business establishments that had been spared remain shut.

Streets were littered with mangled remains of burnt vehicles, bricks and burnt tires, mute testimony to the violence and bloodshed that continued for nearly three days while the Central and Delhi administration failed to act.

After over 72 hours of rioting that began on Sunday night hours, lathi-wielding and gun-totting CRPF and Saharsha Seema Bal (SSB) jawans marched through the entire stretches of Jaffrabad Road. They rained blows on anyone stepping out of their homes. “Curfew hai, bhag andar,” they screamed while swinging their long lathis at those who ventured out.

In the Hindu-dominated pockets of Chand Bagh and Karawal Nagar  many Muslim families left their homes for safer places under police protection.

Carrying a child in her arms, Rukhsana of Karawal Nagar, looked completely lost. She has been staying in a Hindu-dominated pocket for decades, but today police personnel were “urging” Muslims in the area to move to a safer place “till the situation improves.”

“I have not seen anything like this in the last 40 years,” said 65-year-old Rajendra Kumar Mishra. “We lived in perfect harmony till the BJP leader Kapil Mishra began provoking people,” Mr Mishra, clad in a kurta, pajama, Nehru jacket and with an orange tilak shining on his forehead, said as his shikha-sporting friends vigorously nodded their heads in agreement.

On Wednesday, BJP national vice-president Shyam Jaju, who is in-charge of the party’s Delhi unit, told a newspaper that he does not agree with the view of some party leaders that Kapil Mishra is responsible for the violence. “Those leaders who are saying so (that Mishra incited the violence) are wrong. His words were aimed at establishing peace. I disagree with the charge that he was encouraging violence,” he said.

A young girl in Jaffrabad confronted Mr Doval during his visit and expressed fear. “I am a student, we can’t sleep at night. We are not fighting, I can’t go to study,” she complained.

Mr Doval assured her, “You don’t have to worry. This is the responsibility of government and the police.” When the student asked Mr Doval to take strong steps as the “police are not doing their job”, Mr Doval assured her again, “I give you my word”.

In the evening, Mr Doval said, “Situation is totally under control. People are satisfied. I have confidence in law enforcement agencies. Police is doing its work… My message is that everyone who loves their country - also loves their society, their neighbour. Everyone should live with love and harmony with others. People should try to resolve each others’ problems and not increase them.”

Late at night, two women called from two different localities in Maujpur, saying that goons were attacking homes in their lane.

Both Muslim and Hindu residents of colonies that saw unrelenting violence claimed that majority of the rioters were “outsiders.” All, almost unanimously, blamed politicians — from the BJP or AAP, for not intervening, for not protecting them.

Besides hate-mongering BJP leaders, and its administration and security apparatus that remained either in spectator mode or strangely inept and helpless during rioting, the disappointment and anger towards Arvind Kejriwal, a man Delhi had recently re-elected with a resounding mandate in the midst of a polarising and hate-filled communal campaign by the BJP, was heart-breaking.

Apart from inaction of the dharna-prone chief minister who has often taken on his political opponents in effective, impressive ways, people accused him of indulging in “empty lip service” while people were being beaten and shot dead.

At about 10.45 am on Wednesday, Mr Kejriwal had tweeted, “I have been in touch with large number of people whole night. Situation alarming. Police, despite all its efforts, unable to control situation and instil confidence. Army should be called in and curfew imposed in rest of affected areas immediately. Am writing to Hon’ble home minister to this effect.”

On Tuesday, the day that saw the worst rioting, he began his day with this tweet: “@FLOTUS (First Lady of the United States) will attend happiness class in our school today. Great day for our teachers, students, and Delhiites. For centuries, India has taught spirituality to the world. Am happy that she will take back the message of happiness from our school.”

Rajendra Kumar Mishra. “We lived in perfect harmony, till the BJP leader,

Kapil Mishra began provoking people,” Mishra, clad in a kurta, pajama, Nehru jacket and with an orange tilak shining on his forehead said. His pigtail sporting friends vigorously nodded their heads in agreement.

Mr. Mishra, pointing at a gutted Maruti Suzuki showroom, said “this belonged to a Sikh”. He then looked at the adjoining bike showroom, burnt and razed to the ground, and said that it belonged to a local Muslim, Zaheer.

Across the road, a fruit shop had been burnt down to a cinder. The strangely fruity stench of burnt oranges, bananas and grapes filled the area. This belonged to a “Muhammadan”, Mr Mishra said.

Two of the worst-hit areas in northeast Delhi are Chand Bagh and Karawal Nagar. On the pavements of Chand Bagh, anti-CAA-NRC protesters had been sitting peacefully for the last couple of weeks under a makeshift tent, allowing traffic to move smoothly on the Chand Bagh-Wazirabad Road. All that changed on Sunday evening, after Kapil Mishra Tuesday.

The BJP leader, who recently lost to the AAP candidate in Delhi Assembly elections, had addressed people gathered in support of CAA on Sunday and threatened action against anti-CAA protesters if the Jaffrabad road was not opened.

A day later, a mob chanting incendiary slogans, carrying weapons, demolished or burnt everything that came in their way. The dance of violence continued for over an hour.

“A few policemen who roamed the area did not act at all,” locals at Vijay Mohallah said and alleged that at night policemen, accompanied by right-wing goons, barged into their houses, beat up residents.

A few kilometers away, another batch of anti-CAA, NRC protestors were driven away by the police and right-wing elements at Kardampuri on Monday.

Even as security forces prowl the areas, it remains a tinderbox situation and violence could break out at any moment.

Wails of a mother, who lost her son rent the Khajuri Khas, gali no-5 at Chand Bagh. The body of her son, Ankit Sharma, an IB officer was recovered from a culvert on Wednesday afternoon. Tears welled up, as Jamila kept asking of her 14-year-old brother, missing for the last two days.

While the politicians appeal for peace from a safe distance, water scarcity and food shortage have hit the riot-torn areas.

Naseem Ahmed claimed that for the last two days people have been managing with whatever food they have.

A little boy was seen rummaging through a pile of burnt chocolates on a torched tempo.

As electricity lines have been torched, there is no power supply in many of the houses.