To nip social unrest in bud, sell livelihoods, not hatred

The masses have to be fruitfully occupied to be happy and to then make a civilised, happy society, state and nation. 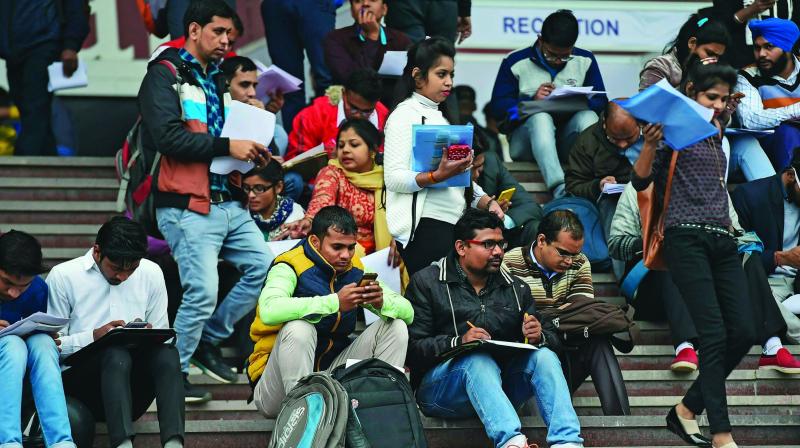 Social unrest comes from poor governance and under this vast umbrella, by the economic frailty of its masses. The masses have to be fruitfully occupied to be happy and to then make a civilised, happy society, state and nation.

This is no rocket science that it would be difficult to understand.

The fear is maybe that it is that the power of unemployment and the resultant discontent, maybe understood all too well and used to serve the selfish interests of a few unscrupulous people.

Let us for a minute imagine these unscrupulous people to be those in governance of the country. It is not too far-fetched to imagine them using the insecurity of the polity to stay in power.

It is not easy to provide employment to the vast youth of this nation. Even if you have promised to do just so, shouting yourself hoarse in election rallies. It is also not easy to fulfil election promises if your priorities are elsewhere. But, it is easy to help the youth of the nation to direct their frustration in other dangerous and unfruitful directions.

The people can be taught to lay the blame somewhere. Anywhere but in the government. They can be told that a certain community is to be blamed for it. That they are taking away jobs, homes, grain, education, healthcare, by simply being a part of the nation. This is a trick of psychology, which has been used by many a devious leader. Once the blame for bad living conditions can be laid at the doorstep of another community by playing up sentiments of religion, caste and creed, all that has to be done is to fan the fires of discord.

Then the rulers take sides, tch-tch and shake their heads at the plight of the downtrodden and become their so-called well-wishers. They, meanwhile, make sure that the common man remains mired in this regressive and fatal mindset — by barraging them with untruths and making sure they remain uninformed, even uneducated. The attempt is to manipulate the minds by tampering with what is being taught in a long term plan of wiping out from current memory, national heroes of the past who have had different viewpoints and ethos from the ruling dispensation.

They feed the people with hatred instead of giving them a livelihood. They barrage the people with manufactured information via WhatsApp message factories and Internet denizens who are hired by the thousands to spread poison in the community. People who do not have the cushion of education or the security of three meals are so susceptible and so very vulnerable. Besides, let us be honest, it is an easy way out. To dig themselves out of the morass of abject poverty, they need to work hard. It is far easier to listen to a leader tell them that the problem lies in other people, in other citizens of the country and of course in the past governments.  The educated, smart people who lead this flock, must do something to keep their story alive. So, they begin a sustained series of symbolic gestures. Perhaps places will be renamed, statues will be built, and chests be beaten to proclaim nationalism. Leaders evoke the love of mothers and sisters with voices choked up with emotion and even tears. Leaders call out the l
ove of the motherland with chants, slogans and the sort. I hate to be banal while writing about such a serious thing, but it is like a gigantic soap opera, the sort that plays on the Hindi channels of the country. And I am not very far from hitting bull’s eye; as we have so recently seen, films are made and propagated by political parties to further their interests.

Most tragically, the army is used to drum up jingoism. The army which must remain sacrosanct and untouched by the vagaries of a country’s political fortunes.

The country is wrought with a sense of unrest and of danger and gloom. Nobody likes to live in drummed up fear.

Our great country is not at risk of disintegration by any foreign power. God forbid, if our nation does go to seed, it will be because of the ruthless apathy of the people at its helm.

It will be because the government ignores the real problems plaguing us at the grassroots level.

It will be because we are not educated, we do not have food to eat, we do not have sanitation and hospitals, because our roads are not built, because enterprise is at an all-time low and because brother is being pitted against brother.

Let us recognise our real enemy within. Let us slay it first. Then see how our youth, whether in Kashmir or in Kanyakumari, work towards their development and the growth of this colossal nation. Let there be no scope for unrest in the middle of the business of spreading health and happiness.