'Where is your bullet train?' Akhilesh takes a dig at Modi

Modi, the SP leader said, served as chief minister of Gujarat for three terms but could not get a Metro there. 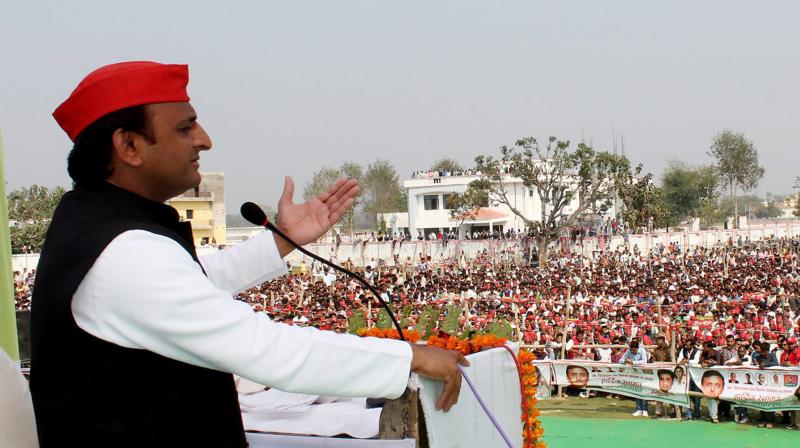 Deoria: Uttar Pradesh Chief Minister Akhilesh Yadav on Monday took a jibe at Prime Minister Narendra Modi over his bullet train promise, asking him to hurry up as he will "not get another chance" at the Centre.

Modi, the SP leader said, served as chief minister of Gujarat for three terms but could not get a Metro there.

"We have started Metro train (but) where is your bullet train?...it has been three years now since your government came to power, where has that train gone?...please hurry up as you will not get another chance," Akhilesh told an election rally here.

"You have been chief minister of Gujarat three times but could not get a Metro there...we have started its work at three places," he said, hitting back at Modi for his charge that UP lacked development.

Referring to the Prime Minister's remark on mass copying in the state, Akhilesh asked, "Are examinations being held anywhere at this point of time...in BJP-ruled states (too) those who had leaked papers were caught."

"Modiji should tell when then US President Barack Obama had come, whom had he copied and got his suit stitched...we know that there was a rich man who got his name printed on his suit and the same has been done by Modiji," Akhilesh said.

Taking a dig at BJP MP from Gorakhpur Yogi Adityanath for his remark over electricity supply in the state, Akhilesh said, "There is a 'baba' (the Yogi, who dons saffron robes) in the neighbourhood who has raised questions on power supply...I will only say that 'babaji' you can touch an electric wire and see whether there is power or not," he said amid applause from the crowd.