Kaur said she could fully understand what Jadhav’s family must be going through at this hour. 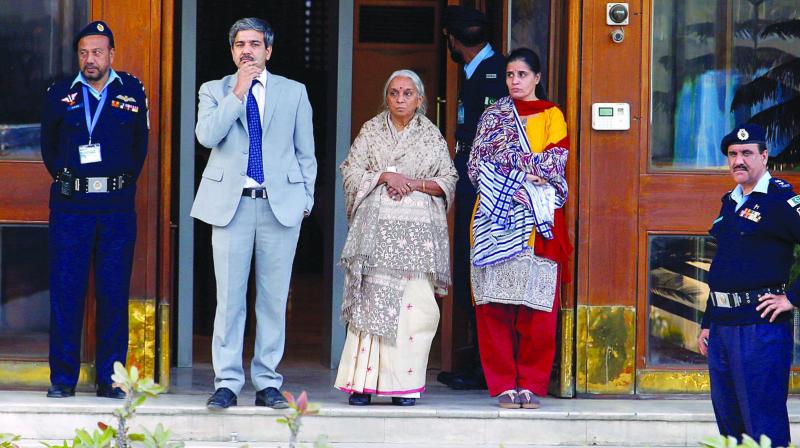 Kulbhushan Jadhav’s (from left to right) wife, mother are being escorted by an Indian diplomat after meeting with Jadhav at foreign ministry in Islamabad, Pakistan. (Photo: AP)

Chandigarh: Dalbir Kaur, the sister of Sarabjit Singh, who died in a Lahore jail in 2013, said Pakistan played a “cruel joke” by not allowing Kulbhushan Jadhav to meet his wife and mother freely and dubbed the entire exercise a “drama”.

Jadhav, on death row in Pakistan for alleged spying, was allowed to meet his wife and mother — but separated by a glass screen — in a choreographed event that unfolded in tweets, photos and TV footage.

It was the fist time Jadhav was meeting his family since his arrest in March last year, and Pakistan portrayed it as a humanitarian gesture to mark the birthday of the country’s founder Muhammad Ali Jinnah.

But Kaur found no “humanism” in the meeting. “When it was held under such tight security and close relatives are separated by a glass screen, it has little meaning,” she said.

Having lost her brother four years back in Pakistan, Kaur said she could fully understand what Jadhav’s family must be going through at this hour.

“Jadhav or his family would know what they were going through by ‘meeting’ but in real sense not meeting at the same time. His family would have wanted to hug him, talk to him freely. But nothing of that sort happened. What solace would this meeting have provided them.”

“But we know they have no ‘insaniyat’ (humanism). They played a cruel joke on Jadhav’s family and with people of our country. They staged drama of a meeting, which I can say was just a sham.”Kaur said Pakistan had pre- planned everything. “They played to the gallery and tried to befool the international community.”