Jadhav's mother and wife were allowed to see him across a glass barrier and talk to him on intercom after months of petitioning on Monday. 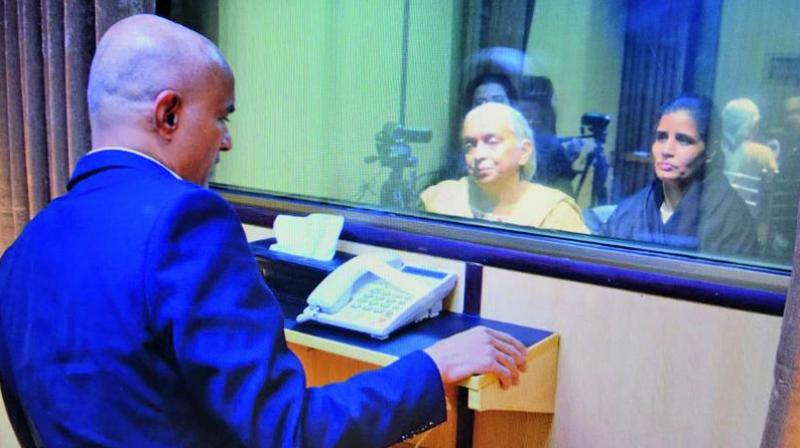 A Pak Foreign Ministry spokesperson said that the glass partition was there for 'security reasons' and Jadhav and his family had been intimated about the same, prior to the meeting. (Photo: AP)

New Delhi: A day after they met Kulbhushan Jadhav in Pakistan, his mother and wife met Union minister Sushma Swaraj at her residence for a complete debrief before leaving for the External Affairs Ministry (MEA).

Jadhav, an ex-naval officer had been convicted in Pakistan in March 2016 for 'spying' and subsequently sentenced to death, a verdict that India challenged in the International Court of Justice (ICJ) to no avail.

After months of petitioning, Jadhav's mother and wife were allowed to meet him on Monday in Pakistan.

Meeting between Commander Kulbushan Jhadev & his family in progress pic.twitter.com/THG925V1fO

Jadhav,  was however, allowed to meet his family members with a glass barrier in between and they could speak to each other only via intercom.

This insensitive behaviour towards a prisoner on death sentence raised many eyebrows.

On being questioned on the issue, Pakistan Foreign Ministry spokesperson Dr Mohammed Faisal said that the glass partition was there for "security reasons" and Jadhav and his family had been intimated about the same, prior to the meeting.

Faisal substantiated his stance by adding that Islamabad considered Jadhav as "the face of Indian terrorism, especially in Pakistan."

Monday was also witness to bizarre ups and downs with respect to Jadhav, as Pakistan first stated that he was getting consular access, then drastically changed the statement after India refuted the claim.

Pakistan establishment's insensitivity did not end at the glass barrier either. It later released pictures of Avanti and Chetankul on the foreign office's Twitter handle, peculiarly captioning it as the two "sitting comfortably" in the foreign office.

The mother and wife of Commander Jadhav sitting comfortably in the Ministry of Foreign Affairs pakistan . We honour our commitments pic.twitter.com/hILiMyp7Zl

Soon after the meeting between Jadhav and his family members, Pakistan held a press conference on Monday where a video was shown that was apparently shot before Jadhav got to meet his kin.

The video showed Jadhav thanking the Pakistan authorities for the grand gesture.

None of the released visuals of Jadhav show him to be in "an excellent healthy condition," as claimed by Pakistan in a medical report prepared by a German doctor of a Dubai-based hospital. It also claimed that Jadhav's Body Mass Index (BMI) was ideal for his height.

On the contrary, there might have been injury marks on the back of his neck as reported by some television channels, which the MEA did not affirm or deny.

The date on the report was handwritten and it was not clear where his medical examination was performed.

Pakistan had earlier been adamant about not letting Jadhav's family to meet him or allow him consular access.

Monday's meeting was made possible after months of international pressure.