The MD said that the employees have abstained from duties on their own. 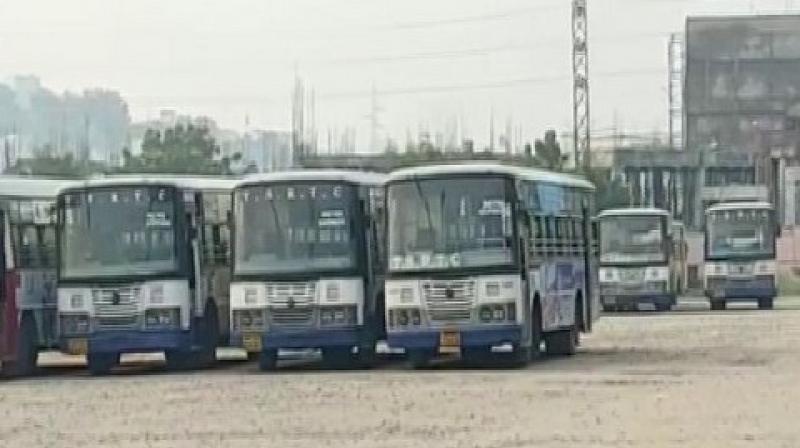 The employees had been protesting since October 5 over several demands, including revision of pay. (Photo: ANI)

Hyderabad: Telangana State Road Transport Corporation (TSRTC) Managing Director, Sunil Sharma, has said that the announcement by the striking employees of the corporation to rejoin work was "ridiculous and unacceptable".

"Nowhere in any Public Sector Undertaking in the country do workers and employees abstain from duties and join their duties at their whims and fancies. It has never happened nor can it be accepted," Sharma said in an official statement on Monday.

The MD said that the employees have abstained from duties on their own.

"They went on an illegal and illogical strike during important festivals like Bathukamma, Dussera and Deepavali and have caused immense inconvenience to the people," he said.

"Everything will be done in tune with the existing Laws and Acts. Till then, everyone should maintain restraint. Till the process as suggested by the High Court is completed, workers who are on illegal strike cannot be taken back on duties," he said.

"Workers have incurred losses by listening to the union's words. Workers should not suffer further believing the words of the union. We request them not to go to the RTC depots tomorrow and create law and order issues," Sharma added in his statement.

The MD further said that cameras would be installed at all the RTC depots and the state government would not tolerate anyone who breaks the law and order situation.

This comes after the striking employees on Monday called off their nearly two-month-old strike, during which time at least five RTC employees committed suicide.

The employees had been protesting since October 5 over several demands, including revision of pay.