'Today is a historic day,' says PM Modi in Parliament on Constitution day

PM Modi addressing a joint session of Parliament said the Constitution of India highlights both rights and duties of citizens. 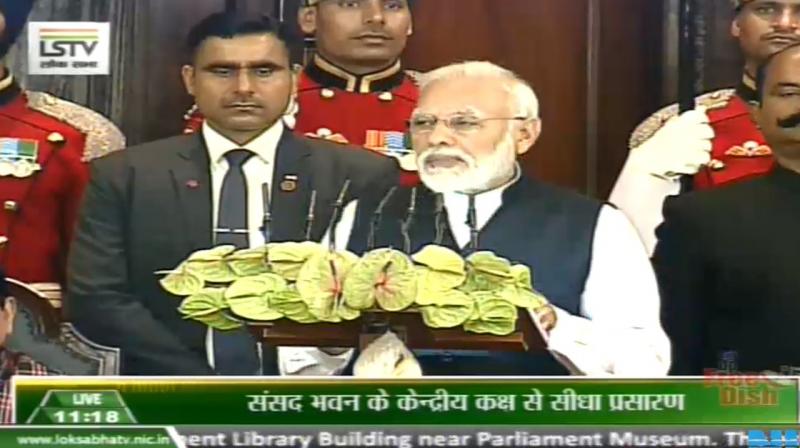 New Delhi: Addressing the Parliament on the occasion of the Constitution day, Prime Minister Narendra Modi on Tuesday said that today was a historic day as 70 years ago, we adopted our great Constitution.

Modi said the Constitution of India highlights both rights and duties of citizens. “This is a special aspect of our Constitution. Let us think about how we can fulfil the duties mentioned in our Constitution,” he added.

Saluting Dr Bhim Rao Ambedkar, who played a key role in the framing of the Constitution, the Prime Minister claimed that "probably" nobody would be happier at the state of affairs in the country than its first Law Minister.

"The two mantras of the Constitution are 'dignity for Indians' and ''unity for India'," Prime Minister Modi told MPs gathered in the Central Hall of Parliament, adding, "Had Babasaheb Ambedkar been alive today he would have probably been the happiest man".

He said that the citizens ensured that the democratic values enshrined in the Constitution are always upheld.

He also outlined Indian citizens' faith in the democracy and stated that the holy book of constitution functions as guiding light.

"I especially bow down to 130 crore Indians, who never let their faith in India's democracy diminish. Always considered our constitution to be a holy book, a guiding light," the Prime Minister told the parliamentarians.

On the 70th anniversary, the government has also planned to launch a campaign to make aware people about the fundamental duties that are mentioned in Part-5A of the Constitution.

Meanwhile, Opposition parties staged a protest outside the Parliament as a joint sitting of both the Houses was underway in the Central Hall.

Congress interim president Sonia Gandhi and party leaders including Rahul Gandhi, Ghulam Nabi Azad, AK Antony among others boycotted the joint-session and protested outside the Parliament premises in front of the Ambedkar Statue opposing government formation in Maharashtra by BJP.

The Opposition parties have announced to boycott the President Ram Nath Kovind's address at the joint sitting as well.