The detained employees were taken to Osmania University Police Station. 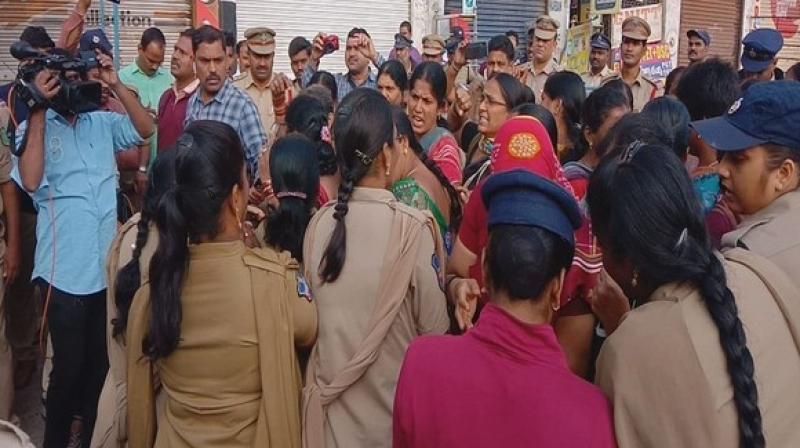 Echoing similar sentiments, another RTC employee Govind Rao said he was not allowed to have his breakfast and condemned the detention by police. (Photo: ANI)

Hyderabad: Employees of the Telangana State Road Transport Corporation (TSRTC), who have been detained by police while reporting for duty, alleged on Tuesday that there were being treated like Maoists and terrorists.

"We were ready to join our duties but the government is not ready to accept it. Since 4 am, we have been waiting for the manager to accept our application but we are being detained instead," Rajkumar, an RTC employee at Barkatpura depot here, told ANI.

Echoing similar sentiments, another RTC employee Govind Rao said he was not allowed to have his breakfast and condemned the detention by police.

"We are being treated as Maoists and terrorists in the state. We have served in TSRTC for so many years. This is not correct. Few of our employees reached the depot to submit an application to the depot manager allowing us to resume our duties. But we got detained by the police. I was not allowed to have breakfast. This is not the way to treat us," Rao said.

Police detained 100 TSRTC workers ready to report for duty, a day after the TSRTC-Joint Action Committee (JAC) issued an order to call off the nearly two-month strike and asked the workers to re-join services. The detained employees were taken to Osmania University Police Station.

The Telangana High Court on November 23 refused to adjudicate on the issue of strike by around 48,000 TSRTC employees. It decided to refer the matter to the Labour Department for a settlement. Also, the state government has said it will not accept the agitating employees back for work.

Heavy police deployment has been made at bus depots and at Bus Bhawan. A two-tier police system was put in place at the Secunderabad Jubilee Bus Station.

The RTC employees have made it clear that they will report for duty and have officially called off their strike. Police said they are ready to detain more workers if they agitate. Police forces also blocked RTC employees at the Kacheguda Railway Station.

A state cabinet meeting will be held at Pragati Bhavan here on November 28 (Thursday). There is a possibility that it could be extended by a day. The RTC issue is expected to be taken up among other issues during the meeting.

The RTC employees on Monday called off their 52-day strike, during which at least five workers employed with the state-run organisation committed suicide. The employees had been protesting since October 5 over several demands, including revision of pay.