India   All India  26 Nov 2019  Rahul Gandhi plays it cool with media outside Parliament
India, All India

Rahul Gandhi plays it cool with media outside Parliament

Gandhi, back from sabbatical, arrived at the Parliament earlier on Tuesday. 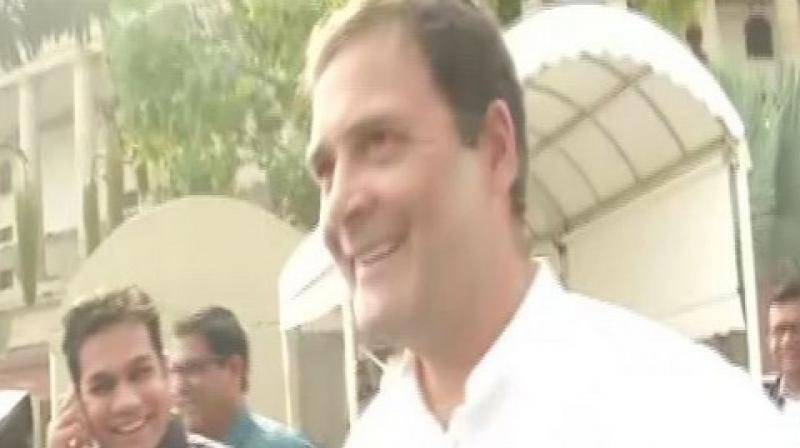 Upon his arrival, he encountered a barrage of questions from the journalists. (Photo: FIle)

New Delhi: Congress leader Rahul Gandhi played it cool with media persons here on Tuesday when he was asked on the Maharashtra political crisis and the opposition parties' protest in Parliament.

Gandhi, back from sabbatical, arrived at the Parliament earlier on Tuesday. Upon his arrival, he encountered a barrage of questions from the journalists.

Although he answered none of the questions put forth by the scribes, a smiling Gandhi instead said to a journalist, "Hi. How are you?"

The Congress leader continued greeting journalists and did not answer any queries despite the media persons bolting after him.

Meanwhile, Congress interim president Sonia Gandhi is leading the opposition protest in front of the Ambedkar Statue against the formation of BJP government in Maharashtra by reading out the Preamble of the Indian Constitution inside the Parliament complex.

Opposition parties have decided to boycott President Ram Nath Kovind's address at the joint sitting of Parliament, on the occasion of Constitution Day.

On the other hand, the Supreme Court ordered that a floor test should be held in the Maharashtra assembly before 5 pm on November 27, days after BJP's Devendra Fadnavis took oath as the state's chief minister nixing Shiv Sena-Congress-NCP's bid to form the government in the state.

The floor test is a constitutional mechanism under which a chief minister can be asked to prove majority in the state Assembly.