India   All India  26 Nov 2018  Want Modi to return as PM, but 'will not tolerate insult' against party: Kushwaha
India, All India

Want Modi to return as PM, but 'will not tolerate insult' against party: Kushwaha

Kushwaha, in his series of tweets, did not mention the issue of seat sharing, but demanded 'justice and respect'. 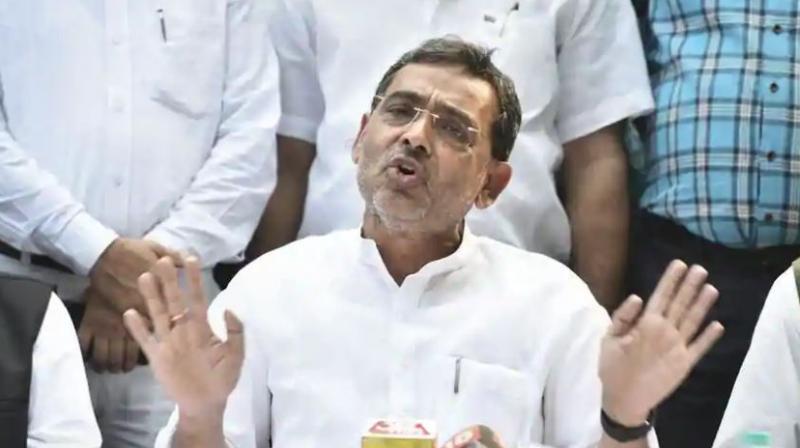 Patna: RLSP chief Upendra Kushwaha Sunday said he was in favour of Narendra Modi returning as the prime minister in 2019, "but will not tolerate any insult" against the party.

Kushwaha, in his series of tweets, did not mention the issue of seat sharing, but demanded "justice and respect".

According to a recent announcement, the BJP and the JD(U) had agreed to contest an equal number of seats in Bihar, out of a total of 40, in the 2019 Lok Sabha elections. This reportedly would have meant fewer seats for the RLSP. The RLSP, as an ally of the BJP in the NDA, had won three seats in the 2014 general election.

He used excerpts from Ramdhari Singh Dinkar's book 'Rashmirathi' to give expression to his thoughts, at times substituting the words of the poet with his words.

Kushwaha said "Do nyay agar to jyada do, par isme yadi badha ho. To de do kewal hamara samman, rakho apni dharti tamam (Give me justice more than what can be, but if there is any problem in it, then give me the respect what I deserve and keep everything with you).

The minister of state for human resource development, had Saturday during a RLSP function in Munger, made a fervent appeal to Mosi, seeking his intervention to resolve the seat-sharing issue in Bihar NDA, in which RLSP is one among the four constituents, along with the BJP, JD(U) and LJP.

"Please do justice with RLSP. We expect justice from you (PM)...I could not meet Amit Shah. I have given additional time of 12-14 days to decide the issue of seat sharing. "I am ready to meet you (Amit Shah) as per your convenient timing but that (ultimatum) is also running out...I would now seek appointment to meet the PM and I hope that justice would be done to RLSP if PM intervenes in the matter," Kushwaha had said.

Kushwaha had on November 17 given an ultimatum to the BJP to conclude seat-sharing talks by November 30, saying the offer made to the RLSP was not respectable. Earlier on November 10, the Union minister had demanded that his party be allotted more than three seats in the state by the NDA to contest the 2019 election, given that the RLSP's strength has grown significantly.