India   All India  26 Nov 2018  Universal electrification: The government that delivers
India, All India

Universal electrification: The government that delivers 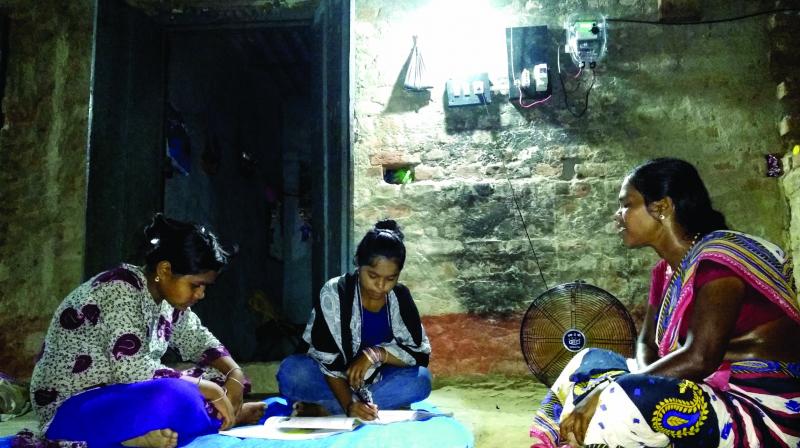 We have set an ambitious goal for ourselves — the goal of providing access to 24x7 power for all in the country. The access to power here represents not only the connectivity to the network but also includes availability of requisite infrastructure across the power sector value chain to ensure supply of quality and reliable power. And we are well on our way to achieve our goal. And the scale of the transition is such as has not been seen anywhere in the world.

The country achieved 100 per cent village electrification on April 28, 2018, a major landmark towards universal electrification. It was not merely connecting the remaining 18,500 odd villages to the electricity network but to reach out to the poorest of poor who had remained in darkness for more than 70 years after Independence. The challenges involved were huge — these challenges had stood as a barrier to extending electricity to these villages for such a long period. Most of these villages were located in remote inaccessible areas with difficult terrain in hilly areas, forest areas, areas severely affected with LWE activities, etc. and transportation of material/equipment and mobilisation of manpower for execution of works required determination and perseverance. The difficulty level kept on increasing as the work progressed further. About 350 villages in Arunachal Pradesh (272), J&K (54), Meghalaya (9) and Manipur (12) located in remote and difficult terrain required head loading of materials and trekking up to 10 days. Materials in some villages of J&K and Arunachal Pradesh had to be transported by helicopter. In 2,762 villages, extending grid network was not feasible due to remote and inaccessible locations; solar-based standalone systems were provided. Enormous challenges were confronted in electrification of 7,614 LWE villages in Bihar, Jharkhand, Chhattisgarh, Madhya Pradesh and Odisha. The electrification of these remaining villages have paved the path for their socio-economic growth. We have the satisfaction of having achieved the target before the target date. This programme has also set an example of effective cooperative federalism wherein the Centre, state governments, distribution companies and administration synergised their efforts for a common goal.

The next step was to light up every household. The Prime Minister launched the Pradhan Mantri Sahaj Bijli Har Ghar Yojana — Saubhagya — in September 2017 with the aim to achieve universal household electrification. Achievement of this within targeted timeline of March 2019 is the challenge we have given to ourselves. As the name of the scheme itself suggests, it has inherent features of “Sahaj” i.e. simple/easy/effortless and “Har Ghar” i.e. inclusive universal household electrification. A targeted programme of such a scale has never been attempted in the world. The progress is again exemplary in terms of speed and innovation. We are lighting up an average of a hundred thousand houses every day. No country has witnessed anything on such a scale. The happiness on the face of the people when their houses are lighted up with electricity is something to be seen. I am sharing some photographs.

We crossed the milestone of lighting the lights to 2 crore households under the Saubhagya scheme (which started in October 2017) on November 19, 2018.

In addition to providing last mile connectivity, strengthening of backup system network in distribution and sub-transmission segment along with metering, IT enablement and automation, etc. is equally important to ensure supply of adequate power with desired quality and reliability. For this purpose also, the Government of India has been providing financial assistance to the states under Deen Dayal Upadhyaya Gram Jyoti Yojana (DDUGJY) and Integrated Power Development Scheme (IPDS) for rural and urban areas respectively. Projects worth `1,40,000 crore have been rolled out under these schemes. Under these schemes, creation of 1,204 nos. of new sub-stations, augmentation of capacity in 1,601 nos. existing sub-stations, erection of 1,61,101 nos. new distribution transformers, 1,11,734 km of HT lines and 98,028 km of LT line has been completed. System strengthening works under these schemes coupled with reforms adopted under Ujwal Discom Assurance Yojana (UDAY) would facilitate 24x7 quality and reliable power supply for all in sustainable manner. Uday interventions have resulted in: (i) reduction in aggregate technical and commercial (AT&C) losses from 20.77 per cent to 18.72 per cent (ii) reduction in ACS-ARR (average cost of supply-average revenue realisation) gap from 60 paise per unit to 17 paise per unit (iii) savings on interest cost of about `31,800 crores to utilities/states and reduction in losses from `51,575 crores to `15,132 crores. NTPC and other major gencos need to be congratulated for keeping the power purchase costs almost constant in spite of increase in cost of coal, freight and other costs.

At the backend of the power value chain, we have achieved “one nation, one grid”. The pace of grid construction has been enhanced to an average of 24,908 km per year in the last four and a half years from an average of 4,385 km in previous years. This ensures power transfers across the country. About 2.96 lakh MVA transformation capacity has been added during 2014-18. Tariff-based competitive bidding has brought in transparency and efficiency in the system.

The huge addition in the consumer base at the rate of one lakh per day, coupled with growth in the economy has meant that our electricity demand has been growing at the rate of more than 10 per cent in these months. The change we are making is unparalleled in scale. But we have more to do. Our vision is clear and our determination is firm. Our estimates are that the number of households left would be less than 50 lakhs. At this rate, almost 50 more days are required to achieve 100 per cent household electrification. If we do it faster, less days to achieve the goal. The world has looked on our progress with amazement and admiration. The International Energy Agency has called it one of the greatest success stories of the year.

In order to meet the growing demand of electricity in the country, which is expected to increase further, addition to the generation capacity is important. During the last four years the total installed capacity has increased by one lakh MW. This has helped in wiping out energy deficit from 4.2 per cent to almost zero at 0.7 per cent. India has for the first time become an exporter of electricity after meeting its internal demand. We have helped our neighbours like Nepal, Bangladesh and Myanmar by exporting 7,203 MUs of electricity.

In order to make our electricity clean and green, we have placed a roadmap to achieve 175 GW capacity in the renewable energy sector by 2022, which includes 100 GW of solar power and 60 GW of wind power. The overall installed capacity of renewable energy has been more than doubled in the last four and a half years from 34,000 MW to 72,000 MW, solar capacity increased eight times in the last four years. We are on the way to achieve our commitment at international fora.

While we continue to increase our capabilities for power generation, we recognise the need to explore avenues that promote energy efficiency. Concerted efforts are being made to efficiently use the energy in the demand side through various innovative and visionary policy measures. Ujala, Star labelling programme, energy conservation building code, energy efficiency measures through perform, achieve and trade (PAT) are few initiatives in this area. The first cycle of the PAT for industry achieved savings of more than 8.6 million tonnes of oil equivalent, which is almost 1.23 per cent of primary energy supply of India. The second cycle is estimated to achieve even higher savings.