India   All India  26 Nov 2018  Kartarpur ceremony: Amarinder no to Pak invite, but Sidhu to go
India, All India

Kartarpur ceremony: Amarinder no to Pak invite, but Sidhu to go

Sidhu accepted Pakistan’s invitation on Sunday, saying this initiative would open “the borders of hearts and the mind”. 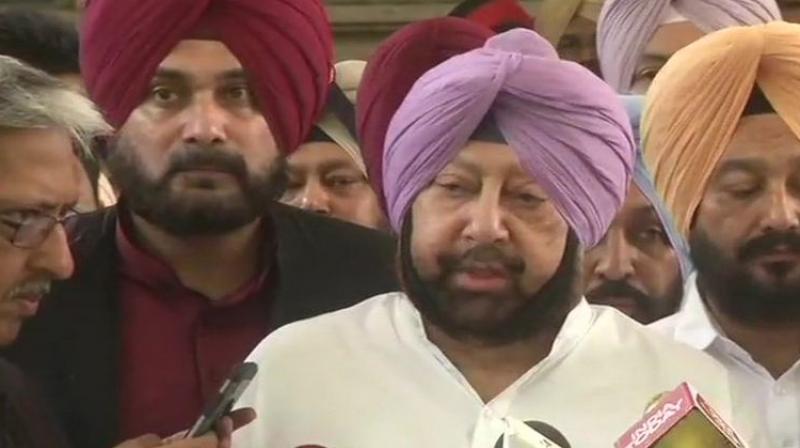 Chandigarh: Punjab CM Capt. Amarinder Singh on Sunday declined Paki-stan’s invitation to attend the Kartarpur Corridor foundation stone-laying ceremony on the other side of the border, citing terror attacks in his state and killings of Indian soldiers by Pakistani troops.

However, senior Punjab minister Navjot Singh Sidhu accepted Pakistan’s invitation on Sunday, saying this initiative would open “the borders of hearts and the mind”.

The foundation stone of the Dera Baba Nanak-Kartarpur Sahib Corridor on the Indian side will be laid by vice-president M. Venkaiah Naidu and the Punjab chief minister on Monday. Capt. Singh declined to attend the ceremony in Pakistan, citing its continuous support to terrorist activities in his state and killing of Indian soldiers by the Pakistan armed forces.

He, however, welcomed the historic occasion and described it as the cherished desire of Sikhs worldwide, but said he “must most reluctantly, however, regret his inability to be present”.

On Sunday, Mr Sidhu wrote to Pakistan foreign minister Shah Mahmood Qureshi, accepting his invitation for the ground-breaking ceremony that will be presided over by Pakistan PM Imran Khan. “It is with great honour and unalloyed joy that I accept your invitation to attend the ground-breaking ceremony at Kartarpur Sahib on November 28. I look forward to meeting you on this historic occasion,” Mr Sidhu wrote to Mr Qureshi.

Mr Sidhu, Punjab’s local government, tourism and cultural affairs minister, said his application “for permission to attend (the ceremony) is now lodged with the ministry of external affairs”.

In the letter, Mr Sidhu said this day “will indeed break ground”, and added: “As our nations take this first step, the Kartarpur Spirit can make pilgrims of us all, venturing out on a journey that breaks the barriers of history and opens the borders of hearts and the mind. A journey that our people can walk together towards, a future of shared peace and prosperity for India and Pakistan.” Mr Sidhu was responding to Mr Qureshi’s letter of November 24.

In his letter to the Pakistan foreign minister, Capt. Singh said his reason for declining the invitation was twofold. “First, not a day passes when Indian soldiers are not killed or wounded on the Line of Control in Jammu and Kashmir. Rather than moving towards normalcy, these incidents are escalating,” he said.

Second, the CM claimed, Pakistan’s Inter-Services Intelligence (ISI) has started its nefarious activities in Punjab. “Since March 2017, the state has neutralised 19 ISI-armed and controlled modules, apprehended 81 terrorists and seized 79 weapons, numerous grenades of the HG-84 type made in Pakistan’s Ordnance Factories with Austrian knowhow, and some IEDs,” the chief minister said.

“I hope the Prime Minister (of Pakistan) will understand these circumstances... It will not be possible for me to be present in Pakistan on this historic occasion, despite the fact that paying my respects at Gurdwara Sri Kartarpur Sahib has always been my cherished dream, which will hopefully be fulfilled once these hostilities and killings are stopped,” he said.