Maldives minister hopes to get $250 million from India

Yameen was openly pro-China and had become a thorn in New Delhi’s flesh, with Indo-Maldivian ties having nose-dived during Mr. Yameen’s tenure. 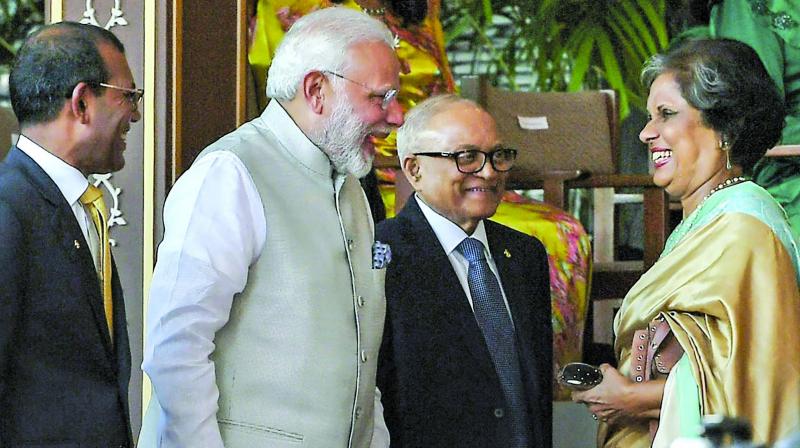 New Delhi: Visiting Maldivian foreign minister Abdulla Shahid has reportedly told an Indian news website that his country needs $250 million to $350 million immediately in order to tide over a budgetary crisis and that he is hoping for financial assistance from the Indian Government.

Mr Shahid will hold talks with external affairs minister Sushma Swaraj on Monday and said he would convey this to her. He also said the information was shared with Prime Minister Narendra Modi when he visited the Maldives a few days ago to attende the swearing-in ceremony of new Maldivian President Ibrahim Mohamed Solih.

“We have an immediate budgetary crisis. We need US$ 250 million to 350 million  in order to handle the difficult budgetary situation ... We’re hoping that we will once again be able to get the generous assistance of the Indian Government,” Mr. Shahid was quoted as telling the news website.

Mr Shahid also reportedly told the website that it is too early to say exactly how much the Maldives owes China even as he lambasted the tenure of former president Abdullah Yameen which he said was shrouded in “secrecy, corruption and underhand deals”. Mr Shahid also said the new Maldivian Government has established a commission to look into the financial crimes (of the previous government), adding that he was hoping to get “expert assistance” in this regard from India, the US and Japan.The Maldivian Foreign Minister blamed former president Yameen for “purposely” landing the country in a terrible f inancial situation.

It may be recalled that former President Yameen was extremely close to China, with Beijing undertaking several infrastructure projects then in the tiny archipelago nation due to which the Maldives reportedly now owes a huge financial debt to China. But under the new Maldivian President Solih, India and its tiny maritime south-western neighbour are the closest of friends once again. Prime Minister Narendra Modi on November 17 had attended the swearing-in ceremony of President Solih. In his meeting with President Solih immediately after the ceremony, PM Modi had “conveyed India’s readiness to extend help in every possible way.”

It is certain that the new President will strengthen ties with New Delhi and reverse the widely-perceived slant towards Beijing that Maldives had adopted during the controversial tenure of his predecessor Abdullah Yameen.

Significantly, the assurance of assistance by India was furnished during PM Modi’s brief visit after President Solih had pointed to the “dire economic situation” facing his country and sought help from India in meeting his Government’s “pledges to the people of the Maldives”. President Solih had “highlighted the pressing need for increased housing and infrastructure development as well as for establishing water and sewerage systems in the outlying islands”.

President Solih’s assuming of office following his victory in the Presidential polls against then president Abdulla Yameen has come as a huge relief for New Delhi. Mr. Yameen was openly pro-China and had become a thorn in New Delhi’s flesh, with Indo-Maldivian ties having nose-dived during Mr. Yameen’s tenure.