If BJP dithers on temple, it won’t form next govt: Shiv Sena

Thackeray said the BJP should clarify whether it had explored all options during its four and a half years at the Centre. 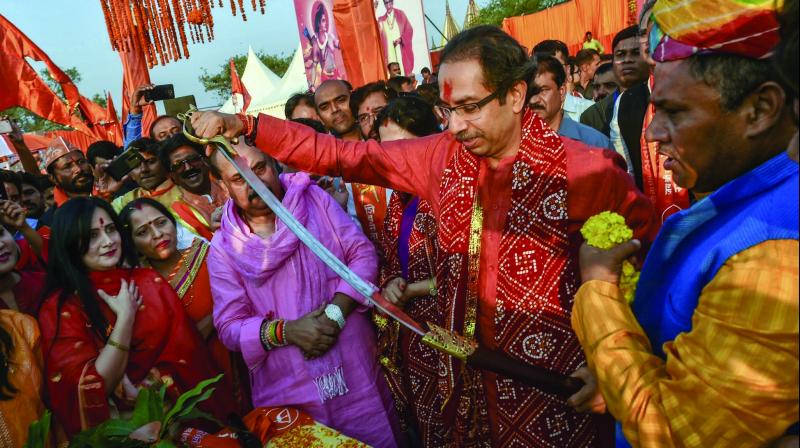 Ayodhya: Shiv Sena president Uddhav Thackeray said on Sunday that if the BJP cannot take the initiative to build the Ram temple in Ayodhya, then it should admit that its promise on the issue in 2014 was just another “jumla” (a word that has no meaning). Addressing a press conference before returning to Mumbai, Mr Thackeray said the BJP should clarify whether it had explored all options during its four and a half years at the Centre.

“If the BJP government continues to dither on the Ram temple, then the Ram temple will surely come up but the BJP will not form the next government,” he said. He noted that Uttar Pradesh chief minister Yogi Adityanath had recently said that there was, is and will always be a temple in Ayodhya.

“But this is only our faith. When would the temple be visible? That is what I want to know,” he said.

He added that the Shiv Sena would support the Narendra Modi government if it brought legislation for the temple. Mr Thackeray reminded that former Prime Minister Atal Behari Vajpayee had said Hindus were no longer fearful.  “But his was a minority government and he could not take the initiative for a temple. But the present government is a powerful one, but there is still no initiative for a temple. Hindus are not going to accept this and will ask the government to declare a date for the temple construction”, the Shiv Sena chief said.

Talking about his visit to the makeshift temple earlier on Sunday, Mr Thackeray said he had got spiritual vibes but he felt he was visiting a jail when he saw the deity surrounded by iron bars.