India   All India  26 Nov 2017  There was no 'Quattrocchi' in Rafale deal, Jaitley takes dig at Rahul
India, All India

There was no 'Quattrocchi' in Rafale deal, Jaitley takes dig at Rahul

The Rafale deal was made to boost the combat ability of the Indian Air Force, Arun Jiatley said. 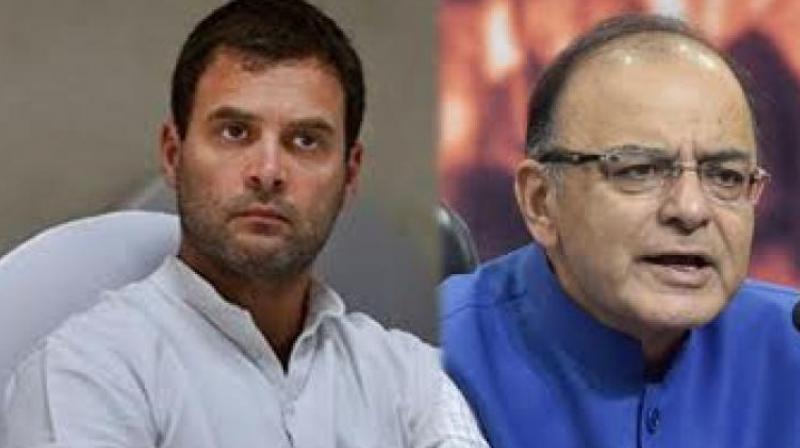 Responding to Rahul Gandhi's allegation that a certain industrialist was favoured and due procedures were not followed, Jaitley implied that Rahul Gandhi may not understand such issues because he has no experience. (Photo: PTI File)

Ahmedabad: Union Finance Minister Arun Jaitley on Saturday hit back at Congress vice-president Rahul Gandhi for questioning the Rafale fighter aircraft deal, saying unlike during Congress regimes when middlemen ruled the roost, there was no "Quattrocchi" in the contract for the fighter jet.

Jaitley, who is the BJP's election in-charge for Gujarat, was referring to Ottavio Quattrocchi, the Italian businessman believed to be involved in the Bofors scam which came to light when Rajiv Gandhi was prime minister.

"It (Rafale deal) was a government-to-government transaction, between two governments. It wasn't like what used to happen during Congress governments, when middlemen used to be there in every transaction. There wasn't any Quattrocchi in this transaction," Jaitley said.

The Rafale deal was made to boost the combat ability of the Indian Air Force, he said.

"I wonder why the Congress leader is raising this issue now, as the transaction was done almost two-and-a-half years back. The very fact that it is being raised after two- and-a-half years indicates it is a motivated campaign linked to the election," Mr Jaitley said.

Responding to Rahul Gandhi's allegation that a certain industrialist was favoured and due procedures were not followed, Jaitley implied that Rahul Gandhi may not understand such issues because he has no experience.

"Since it was a government-to-government transaction, the procedure was different. Another procedure is of tendering. He (Rahul Gandhi) is not having any experience of running a government. And, it is up to the company (Rafale) to choose its partner (in India). Government of India does not decide that," Jaitley said.

Rahul Gandhi on Saturday alleged that Prime Minister Narendra Modi did not want the "truth" behind the multi-crore Rafale deal to come out before the Assembly election, therefore delayed the winter session of Parliament.

"And, has the industrialist (whose company has formed a joint venture with the French firm), who was given the contract, ever manufactured planes?" Gandhi asked while addressing a rally in Gandhinagar district in the morning.

"And a more important question, did you follow the due government procedure? Why the (then) defence minister was seen catching fish in Goa? And, was an approval from the Cabinet Committee on Security taken (for the mega deal)?," he asked.

Meanwhile, responding to the Congress vice-president's Twitter jibe at Modi over the release of Mumbai terror attack mastermind Hafiz Saeed in Pakistan, Jaitley advised Gandhi to refrain from such "immature behaviour".