India   All India  26 Nov 2017  I'm not a terrorist, go ahead with son's wedding without fear: Tej Pratap to Sushil Modi
India, All India

I'm not a terrorist, go ahead with son's wedding without fear: Tej Pratap to Sushil Modi

Earlier this week, a video surfaced showing Tej Pratap threatening to disrupt the wedding of Sushil Kumar Modi’s son to be held on Dec 3. 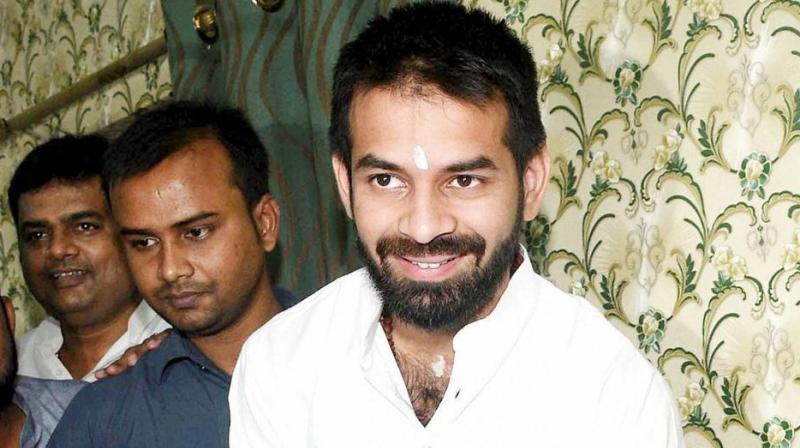 Patna: Rashtriya Janata Dal (RJD) leader Tej Pratap Yadav, who had allegedly threatened to disrupt the wedding of Sushil Modi’s son, on Sunday said he was “not a criminal or terrorist” and the Bihar deputy chief minister should continue with the function “without any worry or fear”.

His remarks came a day after the Deputy CM’s office announced that the venue of the December 3 wedding had been changed to Veterinary College ground (near Patna airport) from Shakha Maidan in Rajendra Nagar due to “security reasons”.

“I am not a criminal or terrorist. Whatever I said at a public meeting should not have been taken literally by Modi. He should go ahead with the wedding without any worry or fear,” Yadav said.

However, he said even if there was not “any untoward incident involving me or my party, their (Sushil Modi/BJP) own men could create a ruckus to defame me”.

In the video aired by news channels, Yadav was seen delivering a speech in Aurangabad and saying: “I have been invited by Sushil Modi to attend the wedding of his son. If I go there I will expose him in public.”

The former Bihar health minister was also heard threatening to indulge in violence at the wedding venue.

Modi has levelled a number of allegations against Prasad’s family acquiring benami properties.

The RJD has trashed all the allegations and accused the senior BJP leader of suffering from “Lalu phobia”.