India   All India  26 Nov 2017  Govt, judiciary, bureaucracy must boost each other, work for new India: Modi
India, All India

Govt, judiciary, bureaucracy must boost each other, work for new India: Modi

Modi also emphasised on the Indian Constitution's important role in the country's overall development after independence. 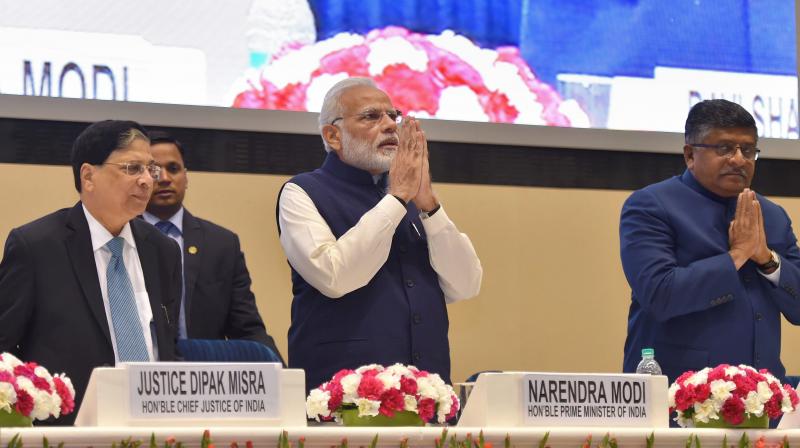 New Delhi: Prime Minister Narendra Modi on Sunday stressed that the legislature, the judiciary and the executive were part of the same family and should strengthen each other and work for new India, even as the Chief Justice and the law minister sparred over the issue of judicial activism.

The prime minister also said that the three wings -- the legislature, the judiciary and the executive -- need to brainstorm on how to move forward in the changed scenario.

"They are members of the same family...We do not have to prove anyone right or wrong. We know our strengths, we know our weaknesses," he said at a gathering of judges and advocates at the National Law Day event here.

Modi pointed out that while fighting for rights, one should not forget about duties.

He emphasised that the balance between the executive, the legislature and the judiciary has been the backbone of the Constitution and it has helped the country during the Emergency.

Modi also pitched for self-regulation and a system of checks and balances for the good health of any institution and quoted B R Ambedkar to state that there should be a limit for any authority.

Before the prime minister addressed the gathering, Law Minister Ravi Shankar Prasad reminded the judiciary of the principle of separation of powers between the judiciary, the legislature and the executive.

He said the concept of separation of power is as binding on the judiciary as it is on the executive.

Responding to the remarks of the law minister, Chief Justice of India (CJI) Dipak Misra said that "there should be mutual respect and there cannot be any claim for supremacy by any of the wings".

The CJI said that the dream of the Prime Minister is a literate, educated and digitally-enabled India and the judiciary is "playing the role of a constitutional catalyst" to achieve the goal.

Referring to the issue of judicial over-reach, Prasad said law-making must be left in the realm of those elected to make the law.

While independence of the judiciary was "important", judicial accountability, probity and propriety were "equally" necessary, he said.

Justice Misra hit back by saying that, "We are not really interested to bring any kind of policy."

"But the moment the policies are formed, we are allowed to interpret and see that they are implemented," he said.

Misra said the judiciary follows the principle of 'judicially manageable standards' under which it does not get into realms where it can't do much. "If we can't do it, we will not get into it," he asserted.

Misra rejected the suggestion that PILs were being used as a means to formulate policies and to govern the country.

He said there had been several writs and PILs which the Supreme Court has turned down. He also said that the apex court has been going "slow" on economic matters, particularly tenders and especially global tenders.

Prasad said while the government accepts the Supreme Court decision to strike down the National Judicial Appointments Commission which sought to overturn the system of judges appointing judges, it is important to appreciate the suggestion of an audit of judicial appointments.

He referred to the contempt of court proceedings by the apex court against Justice C S Karnan.

Prasad said his records show that the then collegium had described him as an expert in all fields of law. Perhaps, he was not an expert on contempt of court, the minister said, without naming Karnan.

The CJI said whenever the law minister writes to the collegium, his observations are not ignored. The recommendations once rejected by the government are not reiterated out of mutual respect.

Earlier in the day too, the two had countered each other's assertions.