India   All India  26 Nov 2017  Citizens’ rights have to be at pinnacle, can't be compromised with: CJI
India, All India

Citizens’ rights have to be at pinnacle, can't be compromised with: CJI

The fundamental rights are in the core value and the bedrock of the Constitution, CJI Dipak Misra said. 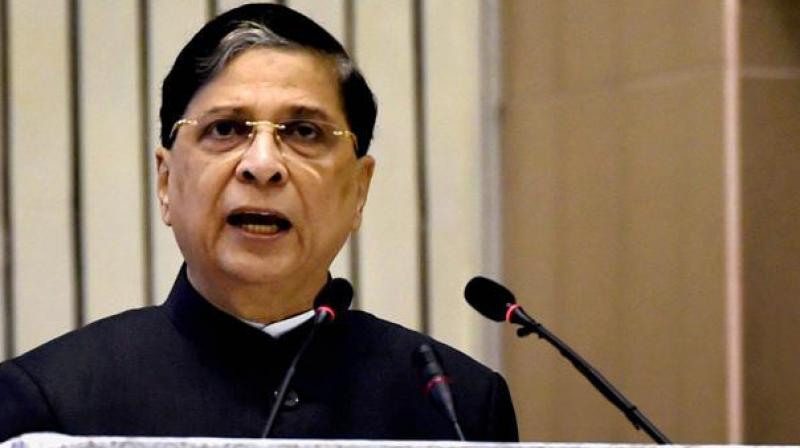 New Delhi: There can be no compromise on a citizen’s fundamental rights, Chief Justice of India (CJI) Dipak Misra said on Sunday while responding to the assertion of Union law minister Ravi Shankar Prasad that governance “must remain” with those elected to govern.

On Prasad’s remark that “PILs cannot become a substitute for governance”, the CJI said the Supreme Court believed in and practised “constitutional sovereignty”.

There can be no compromise with the citizen’s fundamental rights, he said at a function organised by the apex court to celebrate Constitution Day.

“The citizens’ rights have to be at the pinnacle,” Justice Misra asserted.

Calling the Constitution a “lucid” and “living” document, he said, “The Supreme Court of India today believed that we are only under Constitutional sovereignty and we shall practise it”.

Though no right was absolute, there should be no fetters which “destroy the central dogma of the constitution”, the CJI said at the function, inaugurated by President Ram Nath Kovind.

Justice Misra said the focus of the judiciary should be on reducing pending cases, rejecting frivolous litigations and stressing on alternative dispute resolution mechanisms to settle cases.

Speaking at the function, the law minister said though PILs served the purpose in dispensing justice to the poor, they should not be used as a substitute for governance and the law-making powers of the executive and the legislature.

“PILs should not become a substitute of governance and the government because the founding fathers gave this right to those elected to govern,” Prasad said.

He said law-making must be left to the realm of those elected to make the law.

While independence of the judiciary was “important”, judicial accountability, probity and propriety were “equally” necessary, he said.

“In the case of the judiciary, the accountability is latent... Independence (of judiciary) is most important, but probity and propriety are equally important,” he said, while adding that “reckless allegations” should not be made or paid heed to.

Attorney General KK Venugopal termed a “boon” the evolution of the public interest litigation by the Supreme Court and said it had served poor citizens of the country.

He referred to a judgement in a PIL that had led to the mass release of undertrial prisoners who had served the maximum jail terms prescribed for offences during the trial itself.

The top law officer, however, had a word of caution for the judiciary and said the question was if the purpose sought to be achieved by PILs had been attained.

“It is one thing to deliver a judgement in a PIL but to implement it and to achieve results is a totally different thing. Therefore... there has to be collaborative effort,” he said.

He suggested that one or two special benches hear PILs and said there should be adequate guidelines to deal with the pleas.

Moreover, there should be “collaborative efforts” on the part of the judiciary and the executive to ensure that the judgements are implemented keeping in mind the limited resources.

Referring to the humble background of President Kovind, Supreme Court Bar Association (SCBA) president and senior advocate RS Suri said it was the power of democracy and the Constitution that a person from a poor section of society had reached the very top.

The Bar head then raised the issue of delays in appointment in the judiciary and suggested that lawyers practising in the apex court and retired judges be considered and appointed judges in the highest judiciary as mandated under the Constitution.