India   All India  26 Nov 2016  Pakistan yet to recover from surgical strike, says Modi
India, All India

Pakistan yet to recover from surgical strike, says Modi

PM Modi also brought up the issue of water-sharing with Pakistan and the Indus Water Treaty. 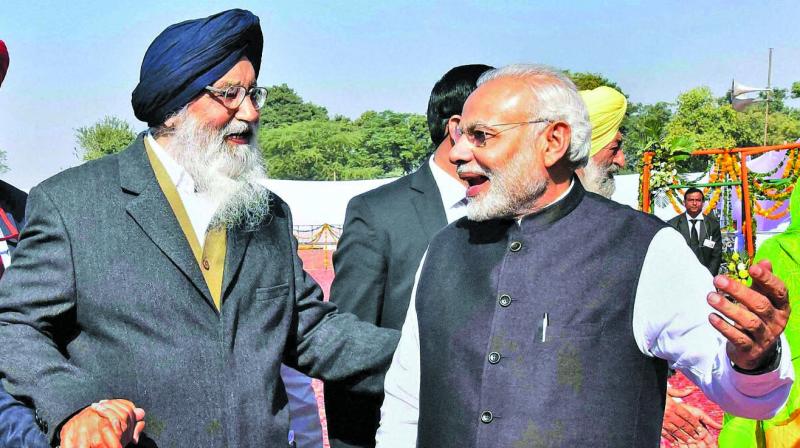 Prime Minister Narendra Modi with Punjab CM Parkash Singh Badal during a rally for laying of foundation stone of All India Institute of Medical Sciences (AIIMS) in Bathinda. (Photo: PTI)

Chandigarh/Bathinda: Prime Minister Narendra Modi on Friday said Pakistan was yet to recover from the setback of the surgical strikes and the Pakistan army was now fully aware of what the Indian soldiers were capable of.

“Earlier, soldiers were unable to show their valour despite having the strength. But now Pakistan has seen the strength of our brave soldiers after they carried out surgical strikes in the 250-kilometre area across the LoC,” Mr Modi said, while attending the inauguration of the All India Institute of Medical Sciences in Bathinda. He went on to say that the Pakistani public should ask their leaders to fight against black money and corruption rather than fighting any country.

“By fighting against India, they (Pakistan) are damaging themselves and killing innocents as well. The Pakistani people also want freedom from poverty. For the sake of political benefits, this atmosphere has been created by them (politicians),” he said.

PM Modi also brought up the issue of water-sharing with Pakistan and the Indus Water Treaty.

He said that India’s share of water from the rivers Sutlej, Beas and Ravi, which are currently going to Pakistan would be used effectively to irrigate the fields of Punjab and Jammu & Kashmir. “As per the Indus Water Treaty — Sutlej, Beas, Ravi — the waters in these rivers belong to India and our farmers. It is not even being used in the fields of Pakistan, but flowing into the sea through Pakistan,” he said, adding that he was committed to making sure “every drop of this water” reached Indian farmers. “The fields of our farmers must have adequate water. Water that belongs to India cannot be allowed to go to Pakistan...The government will do everything to provide enough water to our farmers,” he said. He went on to add that a special task force had already been constituted to action this.

Criticising the previous governments at the Centre, Mr Modi said, “Water kept flowing to Pakistan, but successive governments kept sleeping on this issue and my farmers kept crying for water.” He added that this was not a political gimmick to seek votes, but was a result of his concern for the welfare of farmers. “For me elections do not matter. I am more concerned about the welfare of the farmers,” he said.