The 1.06-minute advertisement showed two women getting ready for the ritual of the festival 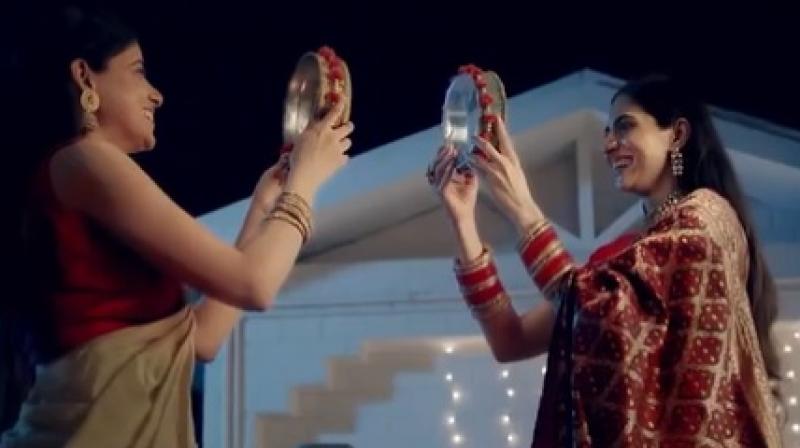 Hyderabad: After jewellery brand Tanishq last year, and clothing brands Manyavar and FabIndia, along-with tyre manufacturing company CEAT this year, consumer goods company Dabur is the latest to join the bandwagon of giving in into online abuse and removing their advertisements from all platforms.

The 1.06-minute advertisement showed two women getting ready for the ritual of the festival in which traditionally, a woman is expected to maintain a day-long fast for her husband and break it after viewing the moon at night.

This eventually did not go down well with many Netizens and some political leaders as well.

The ad, which showed both the women applying bleach on their faces and getting ready for the event, received many negative responses, with Twitterati slamming the brand for "mocking Hindu religion and Hindu festivals."

The ad's tagline, "Glow with Pride" also did not go down well with many Twitter users, with users demanding a boycott on Dabur products.

The company, on Monday, had issued an apology and said that it "strives for diversity, inclusion, and equality" and added that the intention was "not to offend any beliefs, customs and traditions, religious or otherwise".

However, even after the company's apology statement, Madhya Pradesh Home Minister Narottam Mishra on Monday said he has directed the state police chief to convey to Dabur India to withdraw the "objectionable" beauty product advertisement, and ordered them to take legal steps if the ad is not taken back.

"I consider this a serious matter. More so because such advertisements and clippings are made on the rituals of Hindu festivals only. They (the advertisement) showed lesbians celebrating Karva Chauth and seeing each other through a sieve. In future, they will show two men taking 'feras' (marrying each other according to Hindu rituals). This is objectionable," Mishra told reporters.

The company, on Wednesday, took down the ad from all its social media handles and issued an apology again.

"Fem's Karwachauth campaign has been withdrawn from all social media handles and we unconditionally apologise for unintentionally hurting people’s sentiments," the company said on its official Twitter handle.

The Supreme Court in 2018 decriminalised homosexuality, but same-sex marriages are still prohibited in India. The controversy comes at a time when there are a clutch of petitions seeking recognition of same-sex marriage before the Delhi and Kerala high courts.

Dabur India is not the first one to get embroiled in a controversy like this.

Last week, BJP MP Anantkumar Hegde objected to an advertisement of tyre manufacturing company CEAT that featured actor Aamir Khan. In the advertisement, Khan can be seen advising a group of people to burst firecrackers inside a housing society, and not on the streets. In a letter to CEAT Chief Executive Officer Anant Vardhan Goenka, Hegde claimed that the advertisement has "created unrest among Hindus".

Last week, Clothing brand FabIndia has removed a promotional capsule about its new festive line after a backlash from right-wing groups. While the brand was accused of "defacing" the Hindu festival of Diwali by naming its festive collection as Jashn-e-Riwaaz (celebration of tradition), the company insisted that it is not a Diwali collection, which will be soon launched under 'Jhilmil si Diwali' promo.