India   All India  26 Oct 2018  Jagan Mohan Reddy knifed at Vizag airport by man clicking selfie with him
India, All India

Prasad asked how Srinivasa Rao could bring a sharp weapon into the airport when security personnel don’t allow even a nail cutter inside the airport. 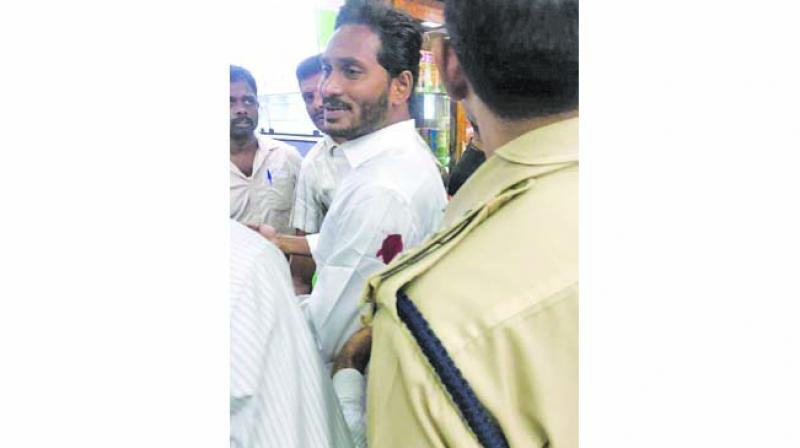 Visakhapatnam: YSR Congress party chief Y.S. Jagan Mohan Reddy was injured in a knife attack at the VIP lounge of Visakhapatnam airport on Wednesday afternoon. A restaurant waiter, identified as Janipalli Srinivasa Rao, was reportedly aiming for Mr Reddy’s neck. However, Mr Reddy pushed away the knife and was injured on his left arm.

Mr Reddy, who is on a padayatra in Vizianagaram district, had come to Vishakhapatnam airport to board a scheduled Indigo flight to Hyderabad at 1.05 pm to attend court on Friday.

Mr Reddy, along with other YSRC leaders, was in the VIP lounge of the airport when Srinivasa Rao, who worked at Fusion Foods restaurant in the airport, approached him with a cup of tea.

He placed the cup on the table and sought Mr Reddy’s permission to take a selfie with him. He told Mr Reddy that the YSRC would win over 160 seats in the state. Then all of a sudden, Srinivasa Rao whipped out a blade that is used during rooster fights and tried to stab Mr Reddy in the neck. Mr Reddy, however, deflected the blade with his hand and suffered an injury on his arm, said YSRC city president Malla Vijay Prasad who was with Mr Reddy at the time of the incident. Srinivasa Rao was roughed up by the YSRC leaders and then handed over to the police.

Mr Prasad called the attack an attempt to murder democracy and a political conspiracy as Srinivasa Rao has been working in Telugu Desam leader T. Harshvardhan Prasad’s food court at the airport. Mr Prasad asked how Srinivasa Rao could bring a sharp weapon into the airport when security personnel don’t allow even a nail cutter inside the airport.

Mr Reddy’s followers say this was a deliberate attack on Mr Reddy by the Telugu Desam because he has been gaining sympathy and support from the people in the state.

Director of Visakhapatnam airport G Prakash Reddy said that that first aid was immediately given at the airport and Mr Reddy then boarded his flight to Hyderabad.

“We have registered a case against the accused Srinivasa Rao based on the complaint from a commandant of the Central Industrial Security Force (CISF) at Visakhapatnam Airport and the investigation is on, said ADCP (Admin) K. Mahendra Patrudu and ACP (West) L Arjun. “Our preliminary investigation has revealed that the accused Srinivasa is a supporter of the YSRC and he committed the crime for popularity only.”

Civil aviation minister Suresh Prabhu on Thursday ordered a probe into the incident. He also said that he had asked the Union civil aviation secretary to fix responsibility in the matter. In a tweet, the minister said, "Shocked by attack on Mr Jagan Reddy, (I have)

Asked all agencies to investigate matter thoroughly, including @CISFHQrs  (CISF that guards airports). (I have) Asked secretary civil aviation to fix responsibility. I strongly condemn this cowardly attack. We will punish the guilty. Investigations are underway, started immediately."