The ministry appointed Col Aman Anand, who is the spokesperson of the Indian Army at present, as the acting Official Spokesperson. 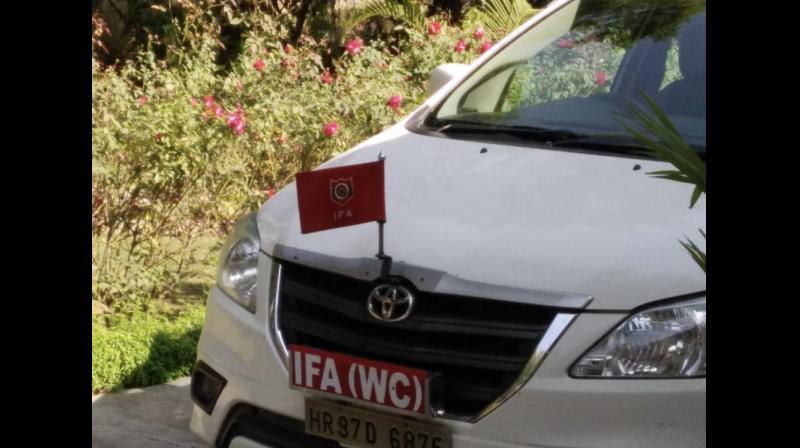 New Delhi: The spokesperson of the Ministry of Defence has gone on leave after a tweet from the spokesperson's official twitter handle criticising the misuse of privileges by military officials sparked an outrage with armed forces’ veterans terming it as an “insult”.

The ministry appointed Col Aman Anand, who is the spokesperson of the Indian Army at present, as the acting Official Spokesperson.

“Col. Aman Anand, took over as the acting Official Spokesperson of MOD as the Spokesperson proceeds on leave,” the defence ministry spokesperson's handle tweeted on Friday evening.

On Friday, Rajashekar responded to a retweet by Admiral Prakash highlighting misuse of flags by civilian officers. The tweet had an image showing the use of a flag on the bonnet of the Internal Financial Advisor appointed to the Western Command of the Army in Chandimandir in Haryana's Panchkula district.

Since bureaucrats are not entitled to such privilege reserved only for top military brass, the visual went viral on social media.

Admiral Prakash retweeted the image with caption, ''Even if misuse of an Army Command's insignia by a civilian is not a cognisable offence, the person needs to be reprimanded".'

Responding to Admiral Prakash's tweet, the defence ministry's spokesperson replied from the official handle: "What about the misuse of jawans in your residence during an officer's tenure sir? And how about children being picked up and dropped to school in Fauji gaadis? Not to forget Madam's shopping expedition, in government vehicle. And endless parties...who pays for that?"

Later, Rajashekar, an official from the Defence Accounts Service, deleted the tweet.

However, the post drew strong reactions from military veterans who felt that Rajashekhar's tweet reflected "a deep rooted and twisted anti-armed forces mindset that prevails in MoD" and bureaucracy.

"Is this inadvertent. It shows the true colours of your MoD Madam. You are meant to protect the military, not insult it. Keeping this spokesperson is an insult to India, its armed forces and their sacrifices. It shows no respect for senior veterans. Your spokesperson is a disaster," Retired Major General Harsha Kakar told Defence Minister Nirmala Sitharaman.

"This is indeed shameful for @SpokespersonMoD to tweet this to a former Service Chief," retired Air Vice Marshall Manmohan Bahadur wrote on Twitter.

Retired Lt General KJ Singh tweeted, "Is it allowed to be done under Official handle. It is dangerous to have such people to project us & our relationship with others".

The former Navy chief chose to ignore the spokesperson's rude reply to him and instead urged the ministry to "reflect" on the state of civil-military relations.

"Rather than getting excited over indiscreet tweet of @SpokespersonMoD I would suggest sober reflection; (a) by MoD on state of civil-mil (military) relations & (b) by Military Leadership on the aspersions cast by MoD (IDAS?) civil-servant on personal conduct of Service officers,'' he said.

Following the outrage, the defence ministry spokesperson apologised for the tweet and said it was "inadvertent".

The post also caught the eye of BJP MP Rajeev Chandrasekhar, who demanded an inquiry into the matter.

Dear @DefenceMinIndia @DrSubhashMoS - who is this “Defence spokesperson” who reprsnts MoD ie govt n talks like this ? 👇🏻😡

This is unacceptable conduct n I wud rqst an enquiry into this. This is unconscionable, disrespectful n arrogance tht behooves a response. @PMOIndia https://t.co/oyWbPgb57B