According to the police, the terror group was conspiring to unleash a series of terrorist strikes in Punjab and adjoining states. 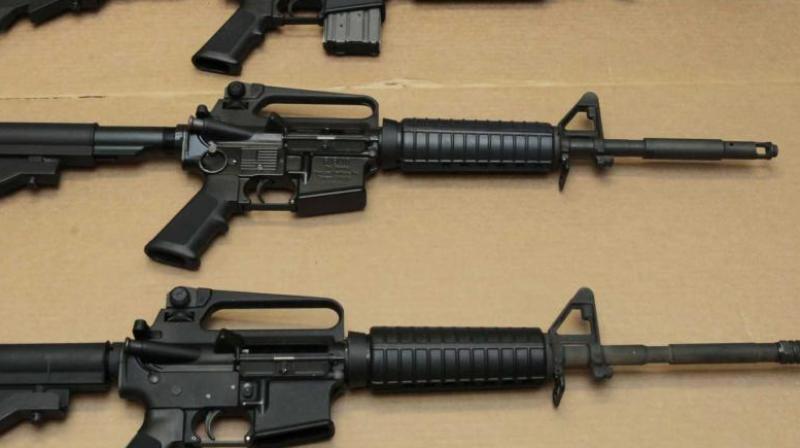 The police seized a huge cache of arms, including 5 AK-47 rifles, satellite phones and grenades during the operation. (Photo: AP/Representational)

Chandigarh: Investigations by the Punjab police have revealed that GPS-fitted drones made multiple sorties from Pakistan to airdrop the cache of arms, ammunition and fake currency seized in Punjab’s Tarn Taran district.

It is the first incident reported in Punjab in which drones were used to drop weapons and communication devices among others from across the border, an official said, adding that a half-burnt drone used in the operation was recovered from Tarn Taran.

The Punjab police on Sunday had claimed to have busted a terror module of the Khalistan Zindabad Force, backed by a group based in Pakistan and Germany. It said the terror group was conspiring to unleash a series of strikes in Punjab and adjoining states.

Gurmeet Singh alias Bagga would share the information about the consignment route with Nita and the place and the time to drop consignments was decided by Akashdeep Singh, sou-rces in the Punjab police said. According to the police, the terror group was conspiring to unle-ash a series of terrorist strikes in Punjab and adjoining states. The police seized a huge cache of arms, including 5 AK-47 rifles, satellite phones and grenades during the operation.

As per sources in police, the powerful drone weighs nearly 10 kg and is capable of transporting 4kg weight in a single sortie. This implies that the drone was used for a number of sorties and not only carried arms and ammunition but also counterfeit currency and narcotics.

Earlier, taking a strong notice of the drone incident in the state, Punjab chief minister Amarinder Singh had requested home minister Amit Shah to look into the issue first hand. In a tweet Capt Amarinder had said that these incidents were just one of Pakistan’s sinister designs following the scrapping of J&K’s special status, Article 370.