Jacobites and Orthodox factions in Ernakulam have been struggling to gain control of 1000 odd churches and their rich treasuries. 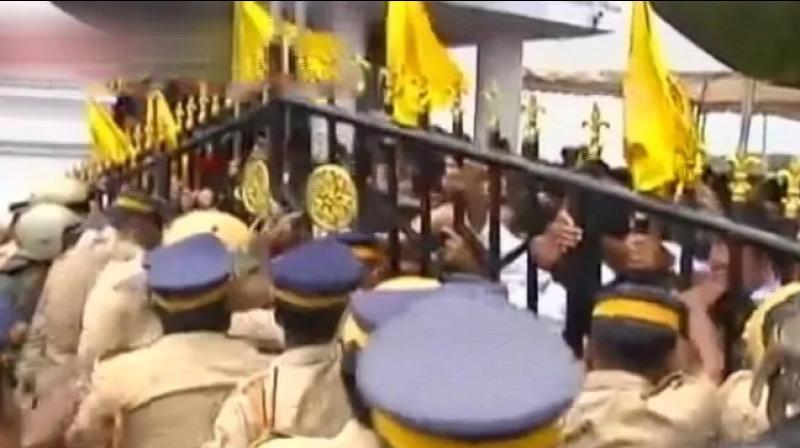 In 2017, the apex court had upheld the 1934 constitution of Malankara church and gave Orthodox group control over 1100 parishes and churches in Kerala but Jacobites, who were controlling majority of the churches, are not ready to give up. (Photo: Manorama news | video screengrab)

Thiruvananthapuram: Tensions are high on the scene at Piravom St Mary’s church in Kerala’s Ernakulam district after police entered the premises to execute an order of the Supreme Court granting control to the Orthodox faction in their showdown with Jacobites, reported Hindustan Times.

Jacobites and Orthodox, two of the biggest Christian factions of the Syrian church in Ernakulam have been struggling to gain control of 1000 odd churches and their rich treasuries. In 2017, the apex court had upheld the 1934 constitution of Malankara church and gave Orthodox group control over 1100 parishes and churches in Kerala but Jacobites, who were controlling majority of the churches, are not ready to give up.

The confrontation between the Orthodox and the Jacobite factions worsened on Thursday, as hundreds of supporters of the latter group camped inside the Piravom Valiyapalli church in rural Ernakulam. The police broke the church gate and took away the Jacobite believers, reported NDTV.

Several protesting Jacobites threatened that they would jump into the river in front of the church, if they were removed forcefully.

The situation at Piravom church deteriorated on Thursday when the Orthodox faction tried to take control and Jacobites refused to budge. Hundreds of Jacobites stood inside the church compound to guard the gate.

Amid the suicide threats, District Collector S Suhas rushed to the spot and tried to reason with the protesters, telling them that the police was there to implement the top court’s orders. The police finally entered the church and started arresting protesters. The court has sought a report by 1:45 pm Thursday of the action taken on their order.

On September 7, the Supreme Court had come down heavily on a judge of the Kerala high court for issuing orders purportedly in contravention to the top court’s direction in the church dispute case.

It took strong exception to the HC’s tinkering of its 2017 verdict on right to conduct administration and prayers in churches in a dispute between two factions. The top court set aside the Kerala High Court order that prayer services at the churches should be performed alternately by the two rival factions of the Malankara Church. The apex court in 2017 said that prayer services have to be performed in consonance with the 1934 Malankara Church Constitution and guidelines.